Blue army on the rise 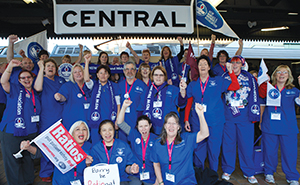 By undermining the NSW Industrial Relations Commission and unilaterally imposing its will on workers the O’Farrell Government has left us with no choice but to campaign in the political arena, NSWNMA General Secretary Brett Holmes told Annual Conference.

NSWNMA General Secretary Brett Holmes paid tribute to the thousands of members who have participated in the “Ratios put safety first” campaign, in his address to the Association’s Annual Conference.

“Congratulations to all of our members and branch officials who have stepped up and taken a stand in the campaign so far,” he said. “I believe it has been one of the Association’s most prepared, researched and planned campaigns.”

Although the New South Wales government remains intransigent on the Association’s claim for improved and extended ratios, Brett assured delegates at the conference that the campaign would continue.

“It is clear that we remain on the right path, both for our members and their patients and ultimately the community of New South Wales. The international support and interest in our achievements and the ongoing campaign reinforces that conviction as well.”
Brett said a clear lesson from the campaign so far was the recognition that nurses and midwives had to engage with the political process.

“I believe that many members have made the shift from thinking politics and politicians were a no-go area, to a clear understanding that this campaign will be won or lost on the basis of what the local politicians, particularly those in government, will do for their communities and constituents.

“More members and branch officials have had direct interaction with their local members of parliament than ever before.

“Our message has to be clear to the state government that this campaign for safer patient care will continue up to the next state election in 2015, and beyond.”

Brett said some of the actions carried out by members to progress the campaign had been inspiring.

“Our ‘crash the conference’ at the New South Wales National Party conference in Bathurst was just one example of members doing something new and different to get the message to their politicians. I have a vision of a blue army of members prepared to show up at short notice to events where decision makers are appearing, to be a presence that cannot be ignored,” he said.

“As always our advertisement asks people to vote for the issue not the party so individuals can make up their own mind about how to cast their vote and be informed about an important issue that both major political parties would have probably preferred to go quiet on,” he said.

He said that the Association’s concern was heightened by a new state government announcement, just prior to conference, to privatise mental health services. This came hard on the heels of an announcement about the privatisation of public hospital services on the Northern Beaches of Sydney.

“Two pilot mental health services will be put out to tender to private companies and the non-government sector to deliver mental health, physical health and drug and alcohol support in their local communities at a cost of $1.8 million.

Aged care win under threat
Brett said another great win for nurses last year was the Aged Care Supplement legislation – the culmination of years of effort via the Because We Care campaign.

“For nurses in aged care it has the promise of the delivery of improved wages and conditions, providing employers agree to participate by enterprise bargaining or adhering to the requirements if they are small facilities.”

He cautioned that this significant win was under threat. “The Federal Coalition has made employers very nervous that they may disallow the funding and withdraw the supplement in its current form, should they win government on September 7.

“The opposition shadow minister for ageing has made statements parliament on at least two occasions opposing the supplement, particularly the fact that it requires employers to bargain with employees, and deliver the money to workers, in order to access additional funding. Put simply a vote for an Abbot Government in either house of parliament could see the aged care money siphoned off or simply given to the providers to do with as they wish, which, going on history, is not to give it all to workers.”