Going global on our ratios campaign 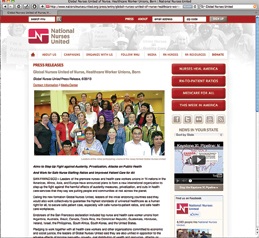 The next steps in our campaign to improve and extend ratios will include international action with the support of overseas nurse unions, says NSWNMA Assistant General Secretary Judith Kiejda.

Formed in June, Global Nurses United will throw its support behind nurses and midwives in NSW with a global action on September 17.

“The NSWNMA now has the support of Global Nurses United as we campaign to have safer nurse-to-patient ratios extended throughout New South Wales public hospitals and community health services,” Judith said.

She said the coordinated action with Global Nurses United would be the first in a raft of actions to take our campaign up to the O’Farrell Government.

“We have two choices: we can wring our hands and complain or we can nail our colours to the mast and say ‘enough is enough’ Barry O’Farrell – we are not going to accept your arrogant and dictatorial behavior.

“Strike action will not be enough turn this government around. It is happy to sit it out, thinking they will let us make some noise, go back to work, and then they’ll continue to run the health system on the backs of nurses and midwives.

“We have developed a list of actions to progress this fight. You may think these actions are not strong enough and won’t deliver results quickly enough, but each one of your actions will add to the cumulative pressure.

Judith says it is critical that each unit and ward in the public health system has a contact person in touch with the Association.

“We no longer have the workplace access we once had, so we need each ward to be connected to us so we can get information about the next action to you. Make sure your organiser knows who that person is.”

Things you can do

• Participate in the global action on September 17

• Collect signatures on our petition

• Sign the commitment card and pledge to involvement in our campaign

• Write to your local paper or get onto talkback radio

• Talk about your issues on Nurse Uncut