Health at risk from extreme climate 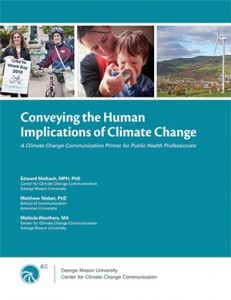 A new report has found that complacency among Australia’s health professionals towards the impacts of climate change is putting lives at risk.

Australian healthcare systems are poorly prepared to cope with extreme weather events and Australia’s health professionals lack understanding of the health impacts of climate change, according to a report by the Climate and Health Alliance.

The national alliance of health sector organisations, including the ANF, says extreme weather is threatening the lives and health of all Australians, but particularly those in rural and remote areas, those who are disadvantaged, poor, unwell, disabled, homeless, elderly, or very young, and those who are highly exposed.

The report says Australians are “neither prepared for, nor informed about, the dangers of the warming climate and the severity and scale of extreme events they are likely to experience in coming years and decades.

“The unprecedented national heatwave of January 2013, floods of 2011, wild weather of 2012, and bush fires of 2009, give an insight into the weather of a warming world. It is a world that may become increasingly dangerous in coming years, intolerable in coming decades and uninhabitable in coming centuries,” it says.

The study cites recent overseas and local examples of the health system creaking under the strain of extreme weather.

“The recent Hurricane Sandy in New York provides a sobering insight into the health care consequences associated with extreme events. Two hospitals that lost power at the height of the storm were obliged to suddenly evacuate patients, with 300 patients evacuated from the New York University Langone Medical Center via darkened stairwells, and over 700 patients evacuated from Bellevue Hospital.

“Closer to home, Cyclone Larry caused significant damage to hospital infrastructure in Queensland in 2006, with Innisfail Hospital forced to close, the Herberton Hospital losing power, and a leaking roof at the Atherton Hospital forcing a partial evacuation.

The demand for services overwhelmed available human resources and nurses were required to travel from Brisbane to provide support to the region.”

The report points out that not only do extreme weather events cause injuries and deaths, as well as mental trauma, there are also other health risks such as increased incidences of food and water borne diseases associated with heat waves and flooding.

It warns that things will get far worse as extreme weather patterns increase in frequency and intensity as the climate continues to change.

Australia had its hottest day on record on Monday January 7 this year, with a nationwide average of 40.33°c, breaking a 40-year-old record. Tuesday January 8 was the third hottest day at 40.11°C.

Sydney experienced its hottest day ever at 46°c on January 18. Four of Australia’s hottest 10 days on record have been in 2013.

“There’s little doubt that this is a very, very extreme heatwave event,” said David Jones, manager of climate monitoring and prediction at Australia’s Bureau of Meteorology. If you look at its extent, its duration, its intensity, it is arguably the most significant in Australia’s history.”