Nurses and midwives held a silent vigil last month, outside a community forum to discuss the new Maitland Hospital development. 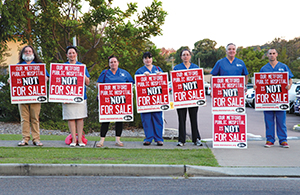 The meeting, run by the Hunter New England Local Health District, was a tightly controlled affair for which attendants needed to pre-register.

NSWNMA General Secretary Brett Holmes said the nurses and midwives at the vigil were determined to send a message to participants to keep the hospital in public hands.

“They want the new Maitland Hospital to be a publicly run and staffed facility that will offer equitable access to everyone in the community,” he said.

Brett says a lack of information about the new hospital has led to concerns among nurses, midwives and the broader community.

“We need the O’Farrell Government to come clean about its plans for the new Maitland Hospital at Metford,” he said. “This vital infrastructure will help meet current and future demands of the growing population and, as taxpayers, local residents deserve to know what options are being explored by the government.

“We have a right to know if the government intends to continue shirking its responsibility to provide public health services, favouring profits over patients and a universal health system.”

Since announcing the proposed 40-hectare Crown land site in August 2013, the O’Farrell Government has been tight-lipped on how it plans to fund and operate the new facility.

The local member for Maitland, Robyn Parker, seems unclear about the government’s intentions. According to local media reports she confirmed the facility would be publicly – not privately – funded. But within 24 hours a spokesperson for NSW Health Minister Jillian Skinner clarified that the funding model had not been decided and would continue to offer public services.