Northern Beaches Hospital staff are still in the dark about their future,  three and a half years after the first announcement of the privatisation  and over two years after Healthscope was named as the provider.

Health unions including the NSWNMA have gone to the state Industrial Relations Commission to try to get answers to vital questions about Sydney’s new, privatised Northern  Beaches Hospital.

The unions notified the commission of a dispute after trying for more than three years to get answers about employee transitions, staffing arrangements and work conditions.

Commissioner Peter Newall recommended that a senior representative of the Ministry of Health attend the next union-employer consultation meeting (held in December).

Commissioner Newall said employees should not be required to make a decision regarding a possible transfer of employment without having all the fundamental answers available.

The NSW government announced the start of a process to choose a private operator to build and operate a new northern beaches hospital at Frenchs Forest in May 2013.

The government did not consult with employees or unions before the announcement.

In October 2014, the government announced it had chosen Healthscope to build and operate the new hospital.

Due to open in 2018, Northern Beaches Hospital is the first of five new public-private partnerships (PPPs) to be run under a new model that will essentially hand over public hospitals to private operators. Other hospitals are Maitland, Wyong, Shellharbour and Bowral. 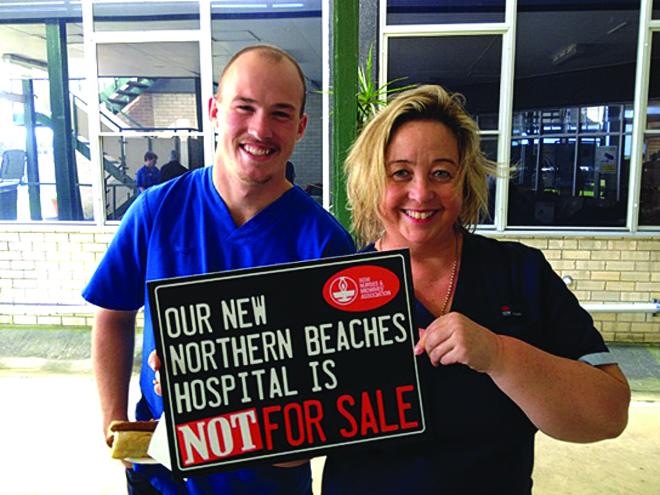 “It is almost beyond belief that critical information can still be outstanding some three and a half years after the first announcement seeking expressions of interest (from private operators) and over two years after selecting Healthscope as the provider.

“The ministry has not provided requested and necessary information about staffing, transitions and all aspects of the employment conditions.

“That has left unions no option but to seek the commission’s assistance.”

Judith said it was unacceptable that nurses and midwives who will transfer to the new hospital were still fighting to find out what all their rights will be under the new provider.

“This is a prime example of the government failing in its duty to manage our public  health system by shutting out workers, unions and the community from the consultation process with the private operator.

“It is one thing to have meetings, and there have been plenty of those, but meaningful consultation requires transparent and timely provision of information. It also requires decision makers to be present.

“This has been sorely absent from this process.

“The public keeps being reassured that public patients  will not be affected in these PPPs but the secrecy surrounding the deal between the government and Healthscope is extremely concerning.

“How can we trust what they say if we still have no clear details around how this model will work?”

The ministry had been unwilling to send a representative to the district-level consultation meetings despite repeated requests from unions.

For example, the schedule says only that the operator “should consider” providing access to a clinical nurse educator and clinical nurse specialist in the cardiology service.

Clinical assistants to NUMs are another omission from the service schedule.

“They currently exist at Manly and Mona Vale hospitals and their omission at Northern Beaches Hospital would leave NUMs stuck behind a computer instead of supervising nursing care on the floor,” she said.

A framework to clarify issues is now in place following the December meeting, says Judith.

“It has only occurred through the persistence of members. This persistence found its reward with the welcome intervention of the Commission.

“The Commission now retains a watching brief on the matter as well as the capacity to intervene if any further blockages occur,” she said.

“The secrecy surrounding the deal between the government and Health-scope is extremely concerning.”   — Judith Kiejda

“A framework to clarify issues is now in place. It has only occurred through the persistence of members. This persistence found its reward with the welcome intervention of the Commission.”

Lyn is an intensive care nurse at Manly Hospital and the union’s branch president.  She has been a union activist for more than 20 years.

“There has been more consultation than you can poke a stick at, but it has been totally ineffectual. They are going through the motions and paying lip service to consultation, but there has been almost no information provided,” Lyn said.

Healthscope has arranged consultative committee meetings with unions, made presentations at staff forums, held meetings for various nursing specialties, and a further set of meetings for different departments.

“As a result of all these meetings, the only thing we know definitively is that all floor nurses will be offered a job.

“None of the HSU members and the engineers, plumbers – and allied health people – know if they will have a job.”

She said the union had been unable  to clarify arrangements concerning  a two-year employment guarantee  and the five-year transition period during which public sector employment conditions would be maintained as a minimum standard.

In addition, Baird government changes to regulations in June 2016 mean public sector employees being transitioned to the private sector are no longer eligible for voluntary redundancies.

“The Northern Beaches Hospital privatisation process started in 2013 so the new regulations should not apply to us, but we can’t even get that clarified at the various meetings,” Lyn said.

“When the government announced the privatisation they said public and private patients in the new hospital would be treated exactly the same.  In fact, that’s not the case.

“If you need cardiothoracic surgery and you’re a public patient you won’t get it at the new hospital, but if you’re  a private patient you will get it.

“Private patients will be placed in  a private wing and public patients in  a public wing.

“During the transition period, staffing for public patients will be by ratios  (or nursing hours per patient day), but that won’t apply to private patients.”

In December, the NSW Industrial Commission recommended that  the ministry send a senior representative to a union-employer consultative meeting.

Lyn said the ministry official arrived one hour and twenty minutes late and the regular Healthscope senior representative did not even attend.

“It was the biggest slap in the face,” Lyn said. “If the unions hadn’t attended we would have been accused of not being interested in finding solutions.

“It has been an incredibly frustrating process. Despite all the consultation  no one is any wiser and we’ve all wasted hours.

“This is meant to be the government’s shining example of how privatisation is to be done. I hate to think what is going to happen to the other four hospitals to be privatised.”

‘They are going through the motions and paying lip service to consultation, but there has been almost no information provided.’    — Lyn Hopper