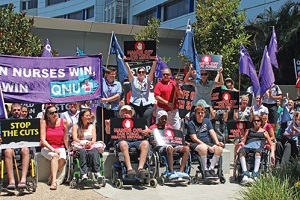 The Queensland public health system, once the envy of all Australian states has been hit by closures and job losses.

“Accountability and transparency are vital features of a safe hospital and healthcare system.”
– Des Elder

Close to 4000 Queensland health workers, including nearly 1000 nurses and midwives, have been sacked as the Liberal-National party government in Queensland has laid the groundwork for private operators to move in to the pubic health system.

Announcing plans for delivery of a large range of health services through public, private and not-for-profit health providers and partnerships, Health Minister Lawrence Springborg said there was potential for private sector involvement in building new elective surgery centres to clear waiting lists, separating elective surgery from emergency surgery procedures at the Royal Children’s Hospital in Brisbane, and for private sector involvement in the Gold Coast University Hospital for the provision of radiation oncology services.

There are many examples of how frontline cuts have been disastrous for patients.

After the closure of the Wynnum Hospital 24-hour emergency centre, staff members were told not to allow entry to patients arriving after 10pm, even in a life-threatening situation. Instead they should administer basic life support at the front door. A blanket and pillow were available in the staff dining room if required.

In June it was reported that a new paediatric emergency department at Redland Hospital on Brisbane’s bayside had been vacant and without staff for nine months. Minister Springborg denied it had been a waste of resources.

Instead, he told the local paper, there could be further cuts at Redland and, he said, Gold Coast hospitals planned to reduce supplies of bandages. Also the state would no longer supply hospital pyjamas for public patients.

Professor Paul Thomas, chairman of the Sunshine Coast Hospital and Health Board, has said: “There is a very strong view that private is the answer. I’m worried at the momentum of that thinking. A private business functions for its shareholders for a profit.”

The mixing of private and public patient offerings raises questions about conflicts of interest, with public services being reduced to protect the revenue bases of private operations.

Acting secretary of the Queensland Nurses Union, Des Elder, says the conduct of the Uniting Church’s Wesley Hospital, in particular in relation to the death of a patient from Legionnaires disease in 2011, raises serious questions about the regulation of private hospitals, as well as the state government’s policy of giving them greater access to government funding for the provision of public hospital services.

In June, following confirmation that another man had died and a woman had contracted legionnaires in the Wesley Hospital, the state government ordered tests of all public hospitals. At time of writing the bacteria had been found in 17 hospitals and this number was expected to rise.

The Wesley Hospital not only failed to report the death in 2011 but, when asked by the media about the subsequent legionella infections, it first denied the 2011 death, then claimed the initial fatal infection may have occurred elsewhere, then said “it was not in the public interest” to report it.

“Accountability and transparency are vital features of a safe hospital and healthcare system,” Des Elder said. “Unfortunately, these two essential components are in short supply in the private sector. Governments and the media have treated private health and aged care operators with kid gloves for too long, and it is time for that approach to stop. Patient safety depends on it.”