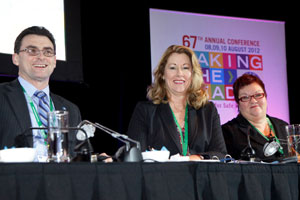 Brett Holmes with Coral Levett and Judith Kiejda at the 2012 Annual Conference.

There was a theme at our 2012 Annual Conference: build on our legacy and strive to improve as a union and as a champion for safe patient care.

The conference was timely. The past year has clarified the environment under which we operate, with a relatively new Coalition state government and less than a year from the expiry of the public health system Memorandum Of Understanding. It was a good time to reflect on what we have achieved and the challenges that lie before us.

The conference heard some passionate addresses from nurse representatives from Ireland, Canada and the United States.

Their message was clear and consistent. Public services are under attack everywhere in the western world. Working people who use them and public sector workers, including nurses, who deliver them are forced to bear the brunt of austerity measures imposed as a result of the global financial crisis. Meanwhile, the irresponsible bankers and corporations who caused the crash are left to continue as if nothing has happened.

The response of our overseas colleagues is inspiring. They are mobilising to defend their health systems from these vicious attacks. They are proactive and innovative in putting forward alternative economic remedies such as a Financial Transactions Tax that would, in one go, tackle speculation in the financial sector and raise significant revenue to fund decent public services.

For us in Australia their message is sobering and cautionary. Our economy sailed through the GFC relatively unharmed – an achievement the current federal government should be given more credit for than it is. But there is an unmistakable trend in Australia that is consistent with, if somewhat lagging behind, our counterparts in Europe and North America.

Here too, conservative political forces have targeted the public sector. Nowhere is this more obvious than in New South Wales. Public sector pay has been frozen, an excellent workers compensation scheme has been gutted and safe staffing measures are under threat.

The past year was one of consolidation for the Association as we worked to bed down the ratios won in the last public health system pay and conditions campaign. The implementation of ratios is on track, despite doomsayers saying there were not enough nurses to fill the positions.

Our next challenge – and it is massive – will come with the negotiation of the public health system Memorandum of Understanding, which expires on June 30 next year.

We will clearly need to be united and strong if we are to repel attacks on our conditions and continue the improvements that we know will deliver better patient care.

An important vote at the annual conference was to change the name of the Association to include midwives in our title.

This is recognition of the evolution of our professions over the years. Bachelor of Midwifery graduates now have their own register. Annual conference – our policy making body – decided it was time to be more inclusive and reflect this modern reality in our name.

The new name – New South Wales Nurses and Midwives’ Association – is now with the industrial registrar to be ratified. We expect approval soon before we incorporate it into our daily work.

Despite the difficult environment the union has achieved good growth over the past 12 months.

There are many more nurses and midwives who could join but have not yet been convinced of the importance of membership. It is all our responsibility to go out and invite these nurses, midwives and assistants in nursing to join our union.