1000 turn out to defend Medicare

Despite an unseasonably wet day, a crowd of more than 1000 people turned up to show their support for Australia’s iconic public health system, and to tell Tony Abbott that Medicare is not for sale.

The Save Medicare rally on February 15 was called in reaction to the Abbott Government floating the idea of a $6 charge for all GP visits and possibly even for emergency department visits.

Brett Holmes says nurses and midwives believe Medicare is sacred and elected governments have a responsibility to look after the health of all citizens.

“Privatising public health and moving towards an expensive and inefficient US-style managed care system is clearly on this government’s agenda,” Brett told the rally. “That is a system where insurance companies decide what care is provided based on level of insurance cover, and where most acute care is delivered by profit- making corporations.

“Obviously, Medicare, is also not off limits in this government’s race into the arms of corporate health care, and the idea that ‘if you can’t afford it you can’t have it’ unless charity steps in.

“We blew the whistle on this move down the path of an Americanised health system prior to the last Federal election, via a TV ad. Of course, the conservative media attacked us. But every new health announcement by conservative governments, state or federal, confirms our prediction.

“Believe me when I say that I wish with all my heart we had been proved wrong.”

Federal deputy opposition leader Tanya Plibersek told the Save Medicare rally that the 30th anniversary of Medicare – in February ­– was a cause for celebration.

“Before Medicare, millions of Australians used to be bankrupted,” she said. “Medical bills were the highest cause of bankruptcy in Australia, as they still are today in the US.”

She challenged Tony Abbott’s claim that it was a scare campaign, to say the government was planning to introduce a GP co-payment.

“The very same night on the 7.30 Report, Joe Hockey said ‘nothing is off the table’,” she said.

Paid to run a hospital with no patients

The British company Serco will be very happy with the $4.3 billion, 20-year contract it has won from the West Australian government, to provide services at the new Fiona Stanley Hospital.

They will be doing cartwheels knowing that for the first year of the contract they will be paid $118 million to maintain the hospital before it has a single patient. $53 million of the $118 million being a compensation payment the WA Liberal government must pay, because of a delay in the planned opening of the hospital.

The government will pay Serco for 200 staff to clean, conduct safety checks and maintain the gardens as part of an “operational project team” while the hospital remains a patient-free zone.

The hospital was originally scheduled to open in April 2014, but will only become fully operational in April 2015.

Serco is a massive British company that has been a major beneficiary of the conservative government privatisation agenda in Britain.

Margaret Hodge, an MP who chairs the powerful public accounts committee of the British parliament has said: “Serco has proved it is good at bidding but not at delivery.”

She told The Independent: “Serco has been desperate to build a presence in the healthcare market by undercutting [bids on] contracts at a cost to the taxpayer and a loss of service.

“It’s pointless being good at getting contracts and then hopeless at delivering the services,” she said.

The company attracted much criticism in Britain when it walked away from its contract at the Braintree Community Hospital in Essex, because it wasn’t making enough money.

Another community rally against privatisation of health

Nurses and midwives and community supporters rally outside Manly Hospital to protect against the privatisation of the new Northern Beaches hospital to be located at French’s Forest. 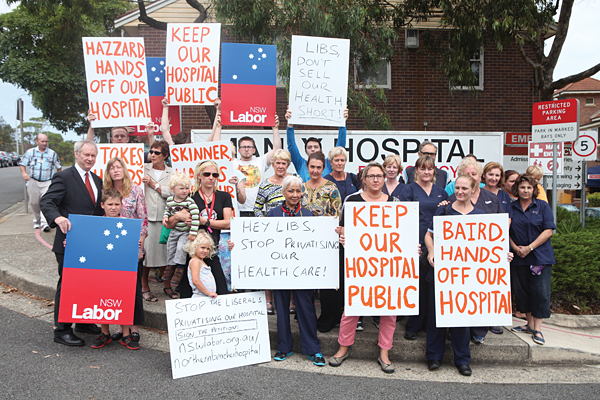