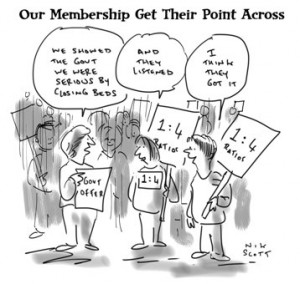 We are on the cusp of winning nurse-to-patient ratios in NSW. This is a momentous achievement and NSWNA members are to be congratulated.

NSW public health system nurses are on the cusp of joining Victoria and California with the power to enforce nurse-to-patient ratios. It is a momentous achievement.

It wouldn’t have been achieved without the resolve and commitment of our membership.

Unquestionably the state-wide strike of 24 November and the bed clo­sures were pivotal in forcing the Govern­ment and NSW Health to final­ly offer ratios as an award entitlement.

I am extremely proud of what you have all done, not only to make your working lives and the lives of nurses who follow us better but also because of the massive effort you have made to provide a better health system for the citizens of NSW.

Ratios plus good pay rises add up to an attractive package

We didn’t get everything we wanted but what we did win is formidable. We won the power of ratios!

If approved by a vote of NSWNA branches the new agreement would see ratios recognised as equivalents to Nursing Hours Per Patient Day (NHPPD) in the award. This is a position the Government and NSW Health resisted with all their might for many years.

In many areas the equivalent ratios in the offer are better than Victoria. This means more nurses will be employed in the NSW public health system to care for patients.

On top of ratios we have won reasonable pay rises of 3.9%, 3% and 2.5% over the next three years. The first rise will be backpaid to the first full pay period in July 2010. Another pay rise will begin in July this year.

This will give some respite to nurses from the ever-increasing costs-of-living and some economic security for the next few years.

There are no big strings attached. The Department withdrew its obnoxious trade off on workers compensation. The pay offer is untouched by the addition of ratios. The removal of the sock and stocking allowance is still part of the offer. But we must keep this in perspective. The additional funding for extra staff amounts to over $180 million per year. The sock and stocking allowance is worth $6 million a year.

There is still work to do

Of course we haven’t won ratios or set NHPPD in every specialty in this bargaining round and I understand that this is very disap­pointing for nurses working in these areas.

I can assure nurses working in community health and community mental health where we are yet to win a mandated staffing mechanism that we will continue to fight for better staffing for you by whatever means and through whatever channels are available to us.

In the meantime we should resolve to limit the services to what can be safely provided by the available staff. If there is no funding available for extra staff there should be no extra services.

A significant achievement in our negotiations has been the beefing up the language in the workloads clause which will give us much more scope for the enforcement of safe staffing.

Our capacity to close beds and limit com­mu­nity based services that developed du­ring the campaign will be an additional tool to enforce safe staffing levels in
the future.

Where to from here and the consequences

The ratios and pay offer now goes to a vote of the public health system branches. The vote will take place in February.

There are some possible scenarios we must consider.

There is a NSW state election to be held in March. A new government would not be bound to honour this offer unless it is embedded in the award and legally enforceable before the election.

If the offer is rejected our campaign would have to start again from scratch against a new government, which could take years and hold up any pay increases.

What we have won in this campaign is a solid platform that we can build on in the future and I would urge you to vote ‘yes’ to the offer and ratify this historic achievement.