Australia’s minimum wage has fallen to a dangerously low level at the expense of all workers, not just the low paid, says the ACTU.

The ACTU is to push for a $45-a-week increase in the minimum wage as the latest national economic data shows that workers are missing out on the benefits of a resurgent economy.

GDP figures are the strongest they have been for seven years while wages and salaries have actually fallen by 0.5 per cent.

New ACTU Secretary Sally McManus says improving the minimum wage will be an important part of the ACTU’s agenda in “the fight to bring fairness back to Australia”.

“Our minimum wage once led the world. Now it does not, it has been slipping rapidly down the rankings. It has barely moved in real terms while bills have soared,” she said at the National Press Club.

“In 1985, the minimum wage was nearly two-thirds of the average wage.  Today it is well under half.  This is dangerous for two reasons.

“It creates a class of the working poor as exists in the US, and a low minimum wage provides a big incentive for employers to destroy good, steady, fairly paid jobs by outsourcing them, cancelling agreements and using labour hire.

Ms McManus says the fall in the minimum wage “to a dangerously low level” was indicative of how the balance of power in Australia has changed with a resulting widening in inequality.

“Inequality in our country is the worst it has been for 70 years and 679 of our biggest corporations pay not one cent of tax. Wage theft is a new business model for too many employers,” she said.

“We cannot accept one rule for the rich, another for the rest of us.”

Ms McManus said it was the Australian union movement who won the first living wage in the world and it would defend that legacy.

“We will submit a claim to lift the minimum wage by $45 a week. This will bring the minimum wage to $37,420 a year. Much closer to what the OECD says is needed to avoid low paid work at 60% of the average wage.”

The ACTU’s push for a much-improved minimum wage is supported by public opinion according to a poll commissioned by the United Voice union late last year.

The survey found 65 per cent of the public agreed with the statement “Australian society has become more unequal over the past few years”.

78 per cent agreed that “inequality affects us all because it creates social and economic division”.

The survey showed strong support (63 per cent) for a significant increase in the minimum wage.

This support is not shared by the federal government or employers.

The Australian Industry Group is arguing that any increase be limited to 1.5 per cent or $10.10 per week.

In its minimum wage submission to the Fair Work Commission, the Turnbull government argued that increases in the minimum wage did not address the needs of the low paid. It also questioned the very notion of a low-income earner.

“Low-paid employees are often found in high-income households,” it said. This claim was repeated by Malcolm Turnbull in parliament.

Mitchell asked Cash how many of the 200,000 workers on the minimum wage lived in high-income households. She failed to answer after Mitchell asked the question 10 times.

When he asked what percentage of the 200,000 were in high income households Cash said, “It’s not so much what percentage”, to which Mitchell replied, “Of course it is”.

Mitchell then said the Turnbull government’s minimum wage submission to Fair Work Australia amounts to arguing that “middle-aged women going and cleaningtoilets in hotels… are going home to a rich sugar daddy”. 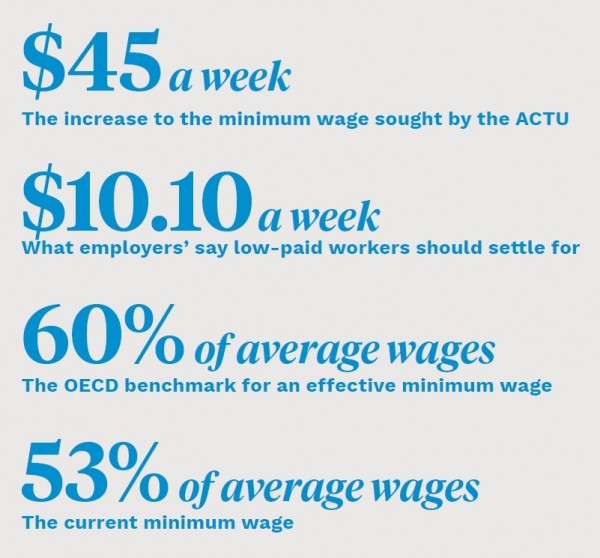 Sally McManus outlines her vision for the Australian trade union movement in her inaugural address to the National Press Club. http://www.actu.org.au/media/1033215/170329-national-press-club-speech-sally-mcmanus.pdf