Nurses were left stunned and confused when cash-strapped St Vincent’s Hospital announced a sudden widespread closure of beds and services in December.

The closures across 10 wards and units started on 18 December and were scheduled to apply for at least six weeks.

They prompted an angry protest by about 130 nurses outside the hospital in Darlinghurst, Sydney.

Management announced that 167 beds would close – about half of all St Vincent’s beds. However, the number of actual bed closures has fluctuated since then.

The hospital had already announced its intention to close a total of 58 beds. The haematology ward is being refurbished and due to the construction noise, the ward below (general, head and neck and colorectal surgical ward) will be closed until the end of February.

The NSWNMA supported the temporary closure of these two wards due to the refurbishment program.

However, the December announcement added a further 75 beds in another six wards and units.

“Slashing this hospital’s entire bed-base by more than half is a serious restructure – temporary or not – and it warrants a thorough consultation process for both staff and the community,” Brett said.

“It is extremely disingenuous for hospital management to cut its bed capacity and services to this scale and pretend that it is part of a ‘normal summer shutdown’ protocol.

“These restructure arrangements will have implications for drug and alcohol services, palliative care, rehabilitation, medical and numerous surgical wards.

“Not to mention the impact on the surrounding hospitals that will be forced to cope with extra patients; those who have to be turned away from St Vincent’s Hospital.

“St Vincent’s Hospital is operated by a not-for-profit health organisation under a special affiliated health agreement with the NSW government.

“Therefore, the health minister should step in and ensure the community is provided access to the public health services it deserves.” 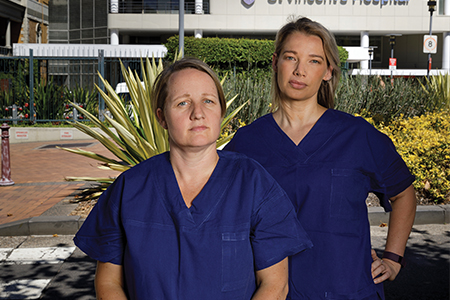 “For example, management closed four ICU beds out of 20 and redeployed staff without giving them the option of taking leave.

“Hospital downtime is nothing new, but the announcement of 167 bed closures was unheard of.

“It has created a lot of anxiety, especially among nurses who are being redeployed to areas they have never worked in before.

“Our educators and NUMs were all on leave so there has been hardly any orientation and support for redeployed staff.

“That includes after-hours support because the after-hours educators who cover seven days a week
were asked to take leave as well.”

Casual staff faced a complete loss of income during the closures.

“Casual staff have loyally worked here for a very long time and we wouldn’t be able to cope without them. Yet they are not being given any shifts because vacancies are being filled by redeployed staff.”

Kristel said that in the past the branch sometimes had trouble getting members to come to meetings.

“However, since November every meeting has been jam packed, with people having to stand or sit on the floor.

“That shows you how concerned nurses are with the deteriorating situation at the hospital.”

She said the announced closures followed a number of adverse changes that had left staff feeling discouraged.

“Nurses feel overwhelmed at having to do more work with less staff. Nurses have resigned and have not been replaced – even at the top level.

“Nurses feel that their efforts and hard work are not being recognised. For the first time, there was no free Christmas lunch offered this year and the free after-hours car park was changed to a fee-paying car park.

“Nurses are angry about the secrecy surrounding the bed closures.

“A lot of nurses, including me, have lost a bit of respect for management as a result.

“The hospital presents itself as a place where it is okay to ask questions. But top management have failed to create an environment where people feel it’s safe to escalate their concerns.

Hospital policy and procedure documents carry the tag “You said – we did. Speak up, you’ll see the difference”. But as Kristel points out, “In an environment where there is so much secrecy, who are you going to ask?”

At its first meeting for 2018, the NSWNMA branch carried a resolution protesting at the behaviour of members of the senior executive team.

The resolution referred to an incident that happened when the emergency department was full and nurses were unable to offload a patient.

“Members of the executive offloaded the patient from the ambulance stretcher into a bay with no nurse allocated to the patient, who was left unsupervised,” Kristel said.

“The executive should let nurses do their job and give them adequate resources to do it properly.”