Bupa needs to catch up

Bupa may position itself as an industry leader promoting quality aged care but it’s failing its nursing staff when it comes to wages and conditions.

Bupa is one of the only providers in NSW who doesn’t have a legally enforcable commitment to safe staffing or a process to address understaffing, workload problems, working short or replacing staff absences.

The NSWNMA claim seeks a four per cent annual pay rise for a new three-year agreement with Bupa – a UK-based private multinational company.

Bupa entered the Australian aged care market in 2007 and is now the third largest provider in NSW.

NSWNMA General Secretary Brett Holmes says Bupa is a highly profitable company that can afford to offer higher wages and better staffing to deliver the quality care they so proudly promote.

“As a profitable industry leader it’s disappointing that its conditions and wages are sub-standard.” Brett says Bupa nurses want their wages to either match those of the leading aged care providers or their public sector counterparts.

“They also want their workloads, safety concerns and ability to provide quality care addressed through a commitment to replacing staff absences and minimum safe staffing levels.

“AiNs want to be paid for administering medications – an additional responsibility the company now requires.”

Winning a pay rise and safe staffing are the most important issues Bupa nurses want addressed in a new agreement, a NSWNMA survey of the workforce revealed.

Brett Holmes said there was strong member response to the online survey which sought nurses’ views on the content of the claim. Input into the claim also came through site visits by NSWNMA organisers, branch meetings at individual facilities and teleconferences involving delegates from over 20 facilities.

Having adequate staff to manage workloads, complete tasks, reduce risks to staff and residents and provide quality care was an area of high concern.

“Too many nurses expressed frustration and concerns about the failure to replace sick staff and regular staff shortages,” Brett said.

“Sixty five per cent told us they can’t provide quality on most days, 61 percent can’t complete their tasks most days due to staff shortages. That is unacceptable to nurses and should also be unacceptable to Bupa management.”

How Bupa ranks in NSW

“Pay increases should be a top priority because it’s a fairly low paid industry given the work and skills that are required,” she said.

“Bupa are trying to grow their aged care business and are positioning themselves as the go-to provider for quality aged care around Australia.

“However their pay rates are not as good as others and they really need to pay appropriate wages in order to attract top quality staff.”

Barbara said ensuring adequate staff are rostered to give quality care should also be a priority.

She said the Armidale branch strongly supported the claim for an on-call allowance to be paid to a nurse to cover unexpected absences on morning shift.

“A staff member can spend up to half an hour trying to contact a relief nurse when someone falls sick.

“Other shifts have clerical and reception staff who can make those calls but morning shift does not – we have to take a nurse off the floor to make the calls.

“If a nurse calls in sick during the night or early morning we can’t start phoning possible replacements until at least 6am, which is a very busy time for staff.

“If a nurse was paid an allowance to be on-call that would make a huge difference.” 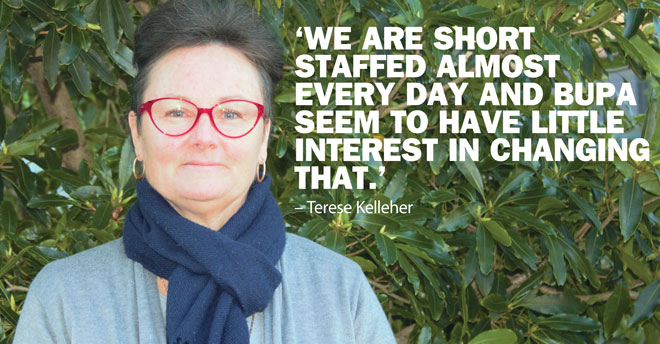 Terese Kelleher, an AiN at Bupa Eden on the NSW far South Coast, said the next enterprise agreement must include payment of an AiN allowance for administering medication, to reflect the responsibility required for the task.

“Currently there is no recognition in our pay and I think it is really important that staff are paid for doing this task.”

Terese is not alone with 24 per cent of AiNs in the NSWNMA workforce survey nominating it as the most important issue for the next agreement.

NSWNMA is seeking a $1.20 an hour medication allowance for AiNs.

Terese said the agreement should also include measures to tackle staff shortages.

She supports the NSWNMA claim for mandatory minimum staffing levels and hopes to see these changes in the upcoming agreement.

“In the 18 months I’ve been at Bupa Eden, numerous staff have left and not much has been done to bring numbers back up again.

“We constantly get urgent texts from management asking for staff for this or that shift – sometimes two or three staff on one shift.

“Nurses are burnt out from having to cover sick leave.

“The worst affected are those people who constantly put up their hands for extra shifts because they don’t want the residents to be left without care.

“I’ve worked in aged care for 14 years and in other places they’ve always had a casual pool to cover annual and sick leave, with management responsible for ensuring there is a consistent flow of interviews to bring new staff in as we need them.”

The NSWNMA nursing workforce survey covered 58% of nurses across all of Bupa’s NSW facilities. Results reveal that:

Many nurses commented on Bupa’s inability to attract experienced staff to cover shifts when roster absences happen. Staff turnover and burn out were raised as serious issues that management needs to address properly.

We struggle every day, someone is going to get hurt.

Not enough staff because the manager always says that they are saving for Bupa and therefore they cut down the staff and hours for shifts.

Too many staff are leaving for a better workplace.

Bupa at a glance