Taiyuan, with a population of 4.2 million, has introduced a ratio of one carer for every five residents in aged care facilities.

As the ANMF sets out on a campaign to introduce ratios into Australian aged care facilities, a Chinese city has shown that it can be done.

Taiyuan, one of China’s largest industrial complexes, located in the north of the country, and with a population of more than 4.2 million has introduced compulsory standards for aged care facilities.

If a facility has 20 beds, the minimum for a “community pension centre” in the area, then it would need at least four aged care workers. That’s a ratio of one carer for every five residents reports online magazine HelloCare.

In May 2017, the Taiyuan municipal civil affairs bureau submitted a draft of what standards were required by the relevant quality supervision departments.

After four revisions and approval by the local provincial expert group, a conclusive set of standards was established that must be met.

These standards were put into place on 1 March this year.

According to Austrade, the Chinese Government has started an ambitious program to transform the country’s aged care.

“The government aims to provide 35 to 40 care beds per thousand elderly citizens and a workforce of 10 million aged care workers by 2020,” it says. 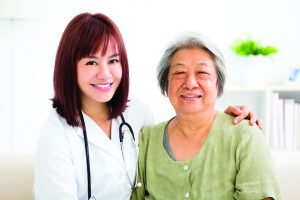