Strong leadership from nurses, midwives and other health unions and overwhelming support from the community, effective backing from local ALP MPs and a lot of effort from committed activists saved Wyong’s public hospital from the profit-grabbing clutches of private corporations.

Euphoria and relief runs through Wyong hospital after the NSW government announced the hospital would remain a publicly owned and operated facility says delegate Pam Illingworth.

“We are elated about it, so over the moon,” she says.

“Everybody is glad that the government has made some common sense moves. And that’s all it is – common sense. Privatisation was never going to work. Everybody has this sigh of relief. We’re now confident we can go back and deliver health care without that underlying worry about what is going to happen in the future.”

While nurses and midwives took up the baton and led the fight to keep Wyong hospital public, Pam says it could never have been won without the overwhelming support of the local community and the other health unions.

“It was encouraging the community got behind us 100 per cent. Nurses and midwives stood up for the hospital but without community support it doesn’t have the same buy-in. The community needs to send the letters and support the rallies and candlelight vigils.

“From the rally we had in October I thought we had the community onside. It was awesome. Beforehand we thought we would get 300 or 400 people. That would have been fantastic. We were floored when we got over 2000 people. We’ve never seen something of that size before in Wyong. Three quarters of them were from the community. It gave us a sense we could do it, that everyone was behind it.”

Pam says the support of local ALP politicians was also critical as was the economic evidence that supported keeping the hospital public.

“The ALP politicians were 110 per cent with us and they took it to parliament for us. I went to parliament to hear our local MP David Harris bring it up. There was no support from the Minister of Health (Jillian Skinner) and that was really disappointing. There were two members from the Liberal party who weren’t even from our area speak in favour of the privatisation. Even their facts were wrong.

“We had an independent economist at a forum we held. He said the numbers just didn’t add up. It was amazing to hear him saying stuff that we had been thinking but he put it into graphs and figures that nurses just don’t know how to do.” 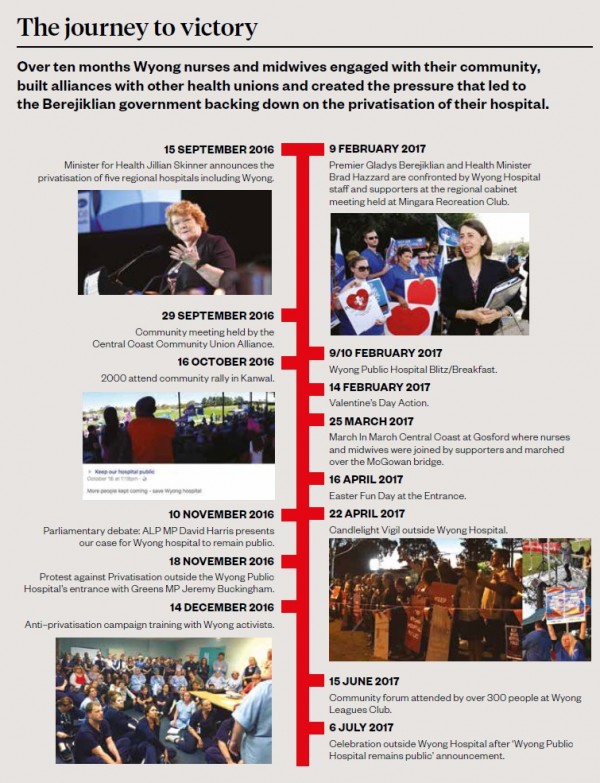