Dubbo nurses stand together despite fears

The NSWNMA branch at Dubbo Base Hospital is stepping up its campaign to stop nurse-to-patient ratios being undermined by unfilled vacancies and an over-reliance on junior nurses.

At a ‘lunch on the lawn’ event opposite the hospital, speakers highlighted the risks resulting from junior nurses being placed in unsupported situations where they are required to make decisions beyond their level of experience.

Three television channels and the local newspaper covered the meeting.

NSWNMA General Secretary Brett Holmes told the media that nurses were under a “very high level of pressure” to keep quiet about their concerns and many did not attend the gathering for fear they “may be targeted”.

“Members have been raising the fact that on many shifts there are relatively inexperienced nurses who are expected to carry a load beyond their level of experience,” Brett said.

“Unfortunately, I’m being told that management is simply denying that circumstance and they are trying to suppress the view of our members.” 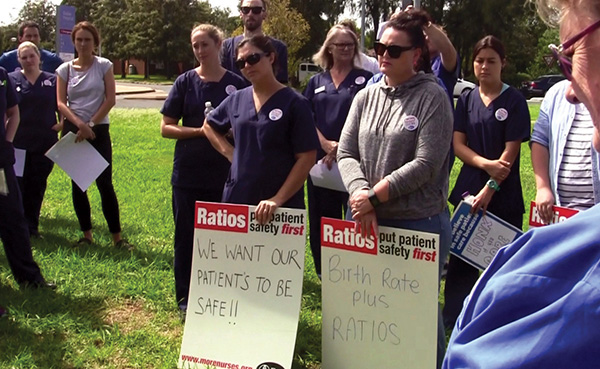 Branch vice president Hannah Mines told The Lamp nurses are “worried that management won’t take what we are saying seriously until there is an incident.”

“The fact that the general secretary of the union came to Dubbo to stand with us shows how serious the situation is. It was great to have his support,” she said.

“We have to work to overcome people’s fear of intimidation and attend this meeting because it may be the only chance for members to speak directly to the district DON,” Hannah said.

An open letter to the LHD executive signed by 285 nurses, ambulance crew and other health workers called on the executive to urgently intervene to provide additional education resources.