As The Lamp went to press the Abbott government was on to its second health minister and the third version of its discredited GP co-payment plan.

The Abbott government’s first health minister Peter Dutton – widely regarded by health professionals as the worst ever (see right) – has been replaced by Sussan Ley. But the government is doggedly sticking with its reviled GP co-payment plan, albeit with a new veneer.

The co-payment has now had three incarnations but with the same objective of making people pay more to visit their GP:

Version 2
In December health minister Peter Dutton and Prime Minister Tony Abbott announced a new plan to reduce or freeze Medicare payments to GPs, leaving it to the doctors to decide how much and to which patients to pass on the costs. Effectively making doctors tax collectors for the government.

Version 3
New health minister Sussan Ley scrapped the $20 cut to Medicare rebates for short GP visits, three days before they were to be implemented and just weeks after they were announced. A $5 co-payment remains as government policy, with the revenue still going to the government’s medical research fund.

New broom Sussan Ley, however, has maintained the same rationale trotted out since last year’s budget that Medicare is “not sustainable”.

“The Medicare levy raises $10billion approximately at the moment and the cost of Medicare is $20billion, so the Medicare levy is hopelessly inadequate in funding Medicare,” she said.

Labor’s health spokesperson Catherine King said the government’s argument about Medicare sustainability was “a sham” when “not a single dollar” from the co-payment would be reinvested in Medicare.

King said only 30 per cent of Medicare Benefits Schedule funds went to general practice, yet that part of the system saw more than 80 per cent of patients.

A report by a group of medical researchers at Sydney University, who have been studying general practice activity for more than 16 years through the Bettering the Evaluation and Care of Health (BEACH) program, also argued that GPs are providing good value to the health system. Their report found:

“Clearly, increases in the amount and complexity of GP clinical work are reflected in additional Medicare expenditure. If other medical specialists and/or emergency departments had provided these extra services, they would have cost far more,” the researchers said. “The average cost of a GP visit was $47 from Medicare, plus a $5 patient contribution. For a private specialist, the average visit costs Medicare $82 plus a $38 patient fee. 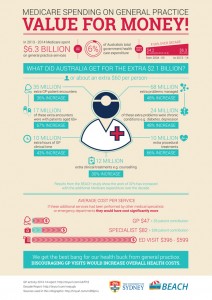 The Abbott government has relentlessly claimed through all three versions of its GP co-payment that Medicare costs more now than it did three years ago – proof that growth in health funding was unsustainable. However three reports authored by health experts have debunked this claim:

In September, the Australian Institute of Health and Welfare found that health expenditure was growing at the lowest level in 30 years, when it began keeping records. The report found total spending on health was just 1.5 per cent higher for the year. When population growth is taken into account, average annual health spending of $6430 per person was actually down in real terms compared to previous years and the Commonwealth’s share of health spending had fallen 2.4 per cent in real terms.

In November, the BEACH (Bettering the Evaluation and Care of Health) report into general practice found that spending on GP services was a sound investment that was reducing pressure on the health budget. “As GP services are far cheaper than other types of medical services, discouraging GP visits by introducing a standard co-payment for most patients would increase costs to governments, now and later,” it found. 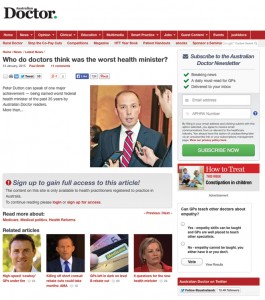 Doctors have voted Peter Dutton as the worst health minister for the past 35 years in a poll conducted by Australian Doctor magazine.

The magazine, which has a readership of 20,000, mainly general practitioners and specialists, received 1100 doctor responses to the survey.

A Tasmanian GP, Dr Donald Rose, told Australian Doctor: “Dutton will be remembered as the dullest, least innovative and most gullible for swallowing the reforms from his think tank … Although I am glad he has been demoted, it would have been good if he was still around to take responsibility for the current chaos he has caused.”

Experts give Dutton a “D”

When online health blog Croakey asked health professionals for their opinion about Peter Dutton’s tenure as federal health minister they received a range of damning assessments. 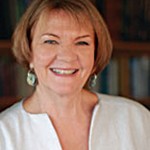 “Someone with little interest in the portfolio and little energy to challenge when policy changes are handed to him which run contrary to public wishes and all the local and international evidence.” — Professor Jill White, Dean, Sydney Nursing School, University of Sydney 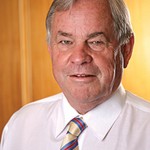 “Chaotic and humiliating. Completely out of his depth.” — Stephen Leeder, Emeritus Professor of Public Health and Community Medicine, Menzies Centre for Health Policy and School of Public Health, University of Sydney 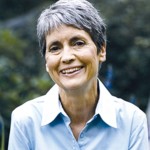 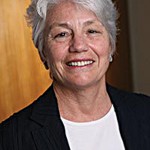 “He squandered his time in opposition and so in government came unprepared to his portfolio where he ignored expert advice, evidence and public opinion to place ideology over good policy. — Prof Lesley Russell, Menzies Centre for Health Policy 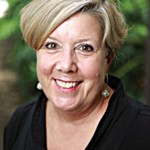