Aged care nurses from around the country made the trek to Canberra to speak truth to power about the importance of penalty rates in keeping skilled staff in their sector.

When the NSWNMA asked Wollongong Assistant in Nursing Linda Hardman to travel to Canberra to talk to Opposition Leader Bill Shorten about penalty rates, she jumped at the opportunity.

“I wasn’t going to miss the chance to explain how cutting penalty rates would impact individual aged care nurses and the sector as a whole,” said Linda, who has worked in aged care for 16 years.

Linda joined several aged care nurses from other states in a meeting with the ALP leader at his Parliament House office.

The meeting lasted almost an hour and Linda said he listened carefully to what the nurses had to say.

“You can tell when people are listening for real and when they’re not. He was very interested to learn just how important penalty rates were to people’s lives.

“I told him that if we lost penalty rates in aged care I would definitely have to re-evaluate whether to stay in the sector or move to an area of nursing where penalty rates still apply.

“Cutting penalty rates is the biggest issue on the radar because it would risk a mass exodus from aged care.

“Without penalty rates we would end up with a low-skilled, inexperienced workforce because those with skills would move to other sectors.

“I explained that we are already at risk of losing some RNs in NSW and we need to be doing things to maintain and strengthen the skill mix, not weaken it.

“He promised the Opposition would raise the issue as often as possible, in order to safeguard penalty rates.

“I welcome that because all the girls at work have been asking me whether our penalty rates are under threat.

“I explained they are not threatened at the moment but it’s a case of being proactive and standing up for them now.

“To be asked to go to parliament to represent aged care workers was wonderful. It was a privilege for me to be the only AiN at the meeting and the only rank-and-file representative of the NSWNMA.” 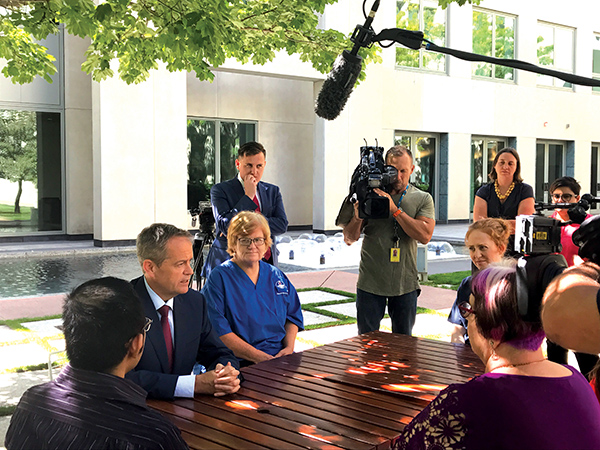 Penalty rates a major portion of an EN’s pay

Queensland enrolled nurse Pat McLean, who has worked in aged care for over 38 years, told the Labor leader that penalty rates make up a major portion of her pay.

“Even as an enrolled nurse in full time employment I am still classed as a low-income worker – that’s how low the pay is,” she said.

She said nurses and AINs across the country are similarly anxious about losing Sunday penalty rates.

“We estimate a registered nurse stands to lose around $2000, with an AiN losing $1200. It’s little wonder that our members are so concerned and why they’re questioning if they will stay in the profession.”

After the meeting, the nurses moved to the House of Representatives chamber to see Mr Shorten raise the issue in question time.

He told parliament it was “an absolute travesty” that from 1 July, a millionaire will get a $17,000 tax cut but a retail worker will get a $77 a week pay cut.

“This parliament has never had a more straightforward choice than it does today.

“There is no wriggle room, there is no fence to sit on, there’s no hole to go hide in.

“You can either vote to save the Sunday pay rates of young people, women, people in the regions – workers who rely upon these penalty rates – or you can vote to endorse cutting them.”

He said, “much of the reasoning relied upon in the penalty rates decision could be adopted when reviewing awards in other industries,” including workers in “aged and health care (particularly non-essential care) and nursing, where it isn’t deemed to be in an ‘essential service’.”

Lee Thomas said the findings were a clear warning that nurses, midwives and assistants in nurses, particularly those working in the low-paid aged care sector, were vulnerable to the loss of penalty rates.

“We’ve long been concerned that ANMF members working in so-called ‘non-essential’ services like aged care, would be next in line and now this legal advice confirms they are open to attack from the FWC,” she said.

Malcolm Turnbull still refuses to stand up for working Australians and pass laws that would protect our penalty rates.

Sign the ACTU petition and tell the Prime Minister that he needs to act to protect the pay of weekend workers: https://www.australianunions.org.au/weekend-workers-don’t-deserve-a-pay-cut 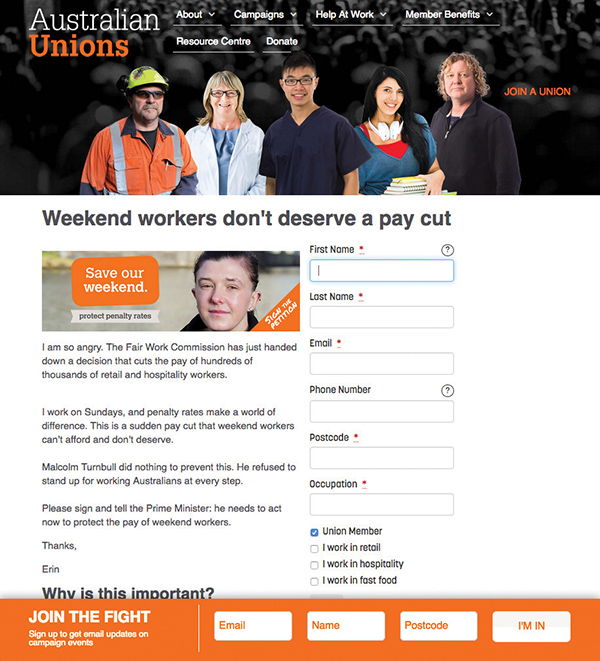