Money to be made from the sick and dying

When profits are put before health, care will suffer and patients will pay more said NSWNMA General Secretary Brett Holmes at a recent community meeting. 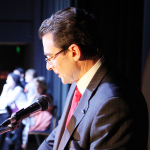 The private sector has a role as an alternative choice for the provision of health care; however its expansion must not be at the expense of publicly provided services available to all. And that is what is at stake.

Which public services will be compromised in order to ensure that private corporations continue to make a profit?

We currently have mandated nurse-to-patient ratios in our metropolitan and larger regional hospitals. We know for a fact that neither of the private operators who are shortlisted for the Northern Beaches Hospital project will commit to ratios.

Even our members who work for these private corporations give us feedback that making a profit is the top priority. And believe me there is a lot of profit to be made out of the sick and dying.

You need only look to the United States. They have a health system predominately run by for-profit corporations with a safety net for the very poor and the aged.

They have one of the most expensive health systems in the world, with some of the worst health outcomes internationally.

The successful corporation chosen for the Northern Beaches Hospital will be locked into a 20-year contract with the state. Similar public-private partnership agreements in the past haven’t even made it that long before the states had to buy them back due to mismanagement. Research indicates that more than half of these projects fail. What then is the justification to hand over two highly regarded public hospitals to a single private operator? Profits of course.

Where do these profits go in a privatised system? They go to the private operator who ultimately decides how the money is spent. The private operator reports to its shareholders about these funds, not to the government, or to you the taxpayers.

The head of Medibank Private has stated that he thinks patients with private insurance should be given priority above public patients without insurance, for emergency services.

In a privatised hospital, which can offer both private and public EDs, this is like money for jam. Next thing you know, the insurance companies will be deciding who pays and who doesn’t, what should be included and what shouldn’t – just like the managed-care system in the US.

As individuals we are spending more on health; this is a real hit to the hip pocket. Soon we could be in the position of having to make the same difficult choices that people make in America; foregoing care for ourselves in order to provide for our children.

It is the Association’s belief that profiting from publicly funded money, and reliance on private health and insurance, will be a recipe for disaster and will only lead to strife and a further hit on our personal hip pockets.

It’s our belief that we can deliver health at a high standard without the profit motive.