Aged care nurses around Australia will soon have an opportunity to help put an end to chronic understaffing of nursing homes.

Nurses’ unions in all states and territories are gearing up for a national More Staff for Aged Care campaign.

They will invite their members to get involved in the campaign, which aims to make aged care understaffing a major issue at the next federal election.

The goal is to persuade politicians to support legislation that makes staffing ratios mandatory in aged care.

The national nurses’ union, the Australian Nursing and Midwifery Federation (ANMF) will launch the campaign on 12 May – International Nurses’ Day.

Acting federal secretary of the ANMF, Annie Butler outlined the campaign to a NSWNMA committee of delegates meeting last month.

She said it would include social media advertising aimed at relatives of nursing home residents and general TV advertising closer to the next federal election, whenever it is held.

“We want the public to understand that aged care staffing is in crisis and to start feeling angry about it.”

The ANMF has set up a national website ‘More Staff for Aged Care’, which invites people to pledge support.

Almost 5000 people have already signed up and about 500 of them have indicated they want to do more to support the campaign.

The NSWNMA will plan on-the-ground activities in NSW and advise members how they can get involved.

Annie said the campaign was not seeking more government funding for aged care.

“In the first instance, we want politicians to make providers more accountable for the billions of dollars they already get from taxpayers.

“Seventy per cent of providers’ revenue comes from the federal government.

“No other industry gets so much public funding as a proportion of total revenue with such little accountability for the use of taxpayer funds.

“Providers should be required to use public money to make sure elderly people get proper care.

“The best way to do that is to mandate adequate and safe staffing ratios.”

Annie said many elderly Australians miss out on the care and treatment they need due to understaffing and lack of accountability and transparency in the spending of public money.

“Many nursing home residents are not properly fed, hydrated or safely given medication and they experience unnecessary pain, suffering and premature death.

“Owners of aged care facilities pocketed over $1 billion in profits in 2017 while cutting staff and nursing and care hours.

“Consequently, nurses and care staff struggle because there is simply not enough of them.

“Australia has strict staff ratios for childcare, which is only fair and reasonable. But in aged care, it’s a very different story, where just one registered nurse may be responsible for managing the care of more than 100 residents.

“Only mandatory ratios for aged care will ensure our elderly get the care they need.” 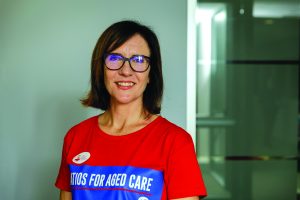 Aged care residents should receive an average four hours and 18 minutes of care per day – almost double the 2.84 hours they currently get.

These were some of the findings of the first Australian study to determine the hours of care and skill mix needed for safe care of the elderly.

Called the National Aged Care Staffing and Skills Mix Project, the study was done by the Australian Nursing and Midwifery Federation (ANMF) and researchers from Flinders University and the University
of South Australia.

She says Productivity Commission reports and Senate inquiries have recommended that a method of determining safe staffing levels and skills mix in aged care be established.

“Nursing homes operate under the Aged Care Act of 1997, which says only that the numbers of care staff should be adequate to meet the assessed care needs.

“However, the Act does not define ‘adequate’ and successive governments have failed older Australians by failing to legislate for staffing ratios.

“This is an urgent and growing problem because the number of residential aged care places has grown to 200,689 operational places as at June 2017 – excluding flexible places.

“Inadequate staffing is the main cause of incidents of missed care, which are common across all aspects of care.”

To read the full report go to:

Evidence of the need for staffing ratios in aged care continued to mount during 2017.

A Senate inquiry into the future of Australia’s aged care workforce found that current nurse ratios were “too low
and risked compromising the quality of care delivered”.

It recommended that providers publish their workforce ratios “in order to facilitate informed decision making by aged care consumers.”

A damning report by the Australian Law Reform Commission revealed that the lack of minimum staffing regulations and appropriate skills mix had resulted in the abuse of nursing home residents.

Another report by Monash University researchers found that the number of deaths in nursing homes from preventable causes had increased by 400 per cent in the 13 years between 2000 and 2013.

In NSW, a survey of over 700 NSWNMA members working in residential aged care revealed that poor staffing ratios and skills mix impacted on nurses’ ability to follow safe medication practices.

An alarming 83 per cent of nurses said they had witnessed a medication error.

Members spoke of AiNs being given medication competency training by trainers who are not competent themselves and RNs being given the impossible task of overseeing medications for up to 200 residents in a facility where residents are housed on different sites. 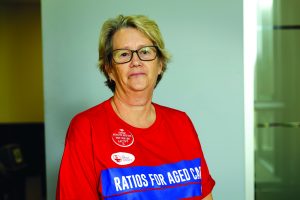 “I do a morning shift in a hospital and I’m looking after five patients. I go to my aged care shift in the afternoon and I have 52 residents under my care,” says endorsed enrolled nurse Pam McInnes.

“Often I don’t have time to even lay eyes on every resident during a shift.

“It’s not fair on them – they are paying good money and we should be providing better care.”

Pam works on a casual basis at two nursing homes and a hospital on the NSW north coast.

She has spent about nine years in aged care. After starting out as a hospitality employee she did an AiN course then trained as an EN.

She supports the ‘More Staff for Aged Care’ campaign because staff cuts have “pushed aged care workers towards breaking point”.

“We voiced our concerns at the time and pointed out that it was already impossible for three of us to get through the work, let alone just two nurses.

“We were told that if we didn’t like it we could leave.”

Pam says the planned ANMF advertising campaign is a good move because the public need to know the true situation inside many nursing homes.

“Staff are rushing to shower people so they will get enough time to shower the next person.

“Skin tears and bruises happen more often because everyone is rushing to get through their tasks. That creates more wounds for nurses to attend to.

“And when nurses don’t have time for pressure area care every two hours, residents end up with pressure ulcers as a result.

“Some nursing homes are experiencing an increasing number of falls due to a lack of staff to assist residents.  And more injuries mean more hospital presentations.

“Staff also have to rush through meal times. That means residents who are slow eaters don’t get the nutrition they need and may start to lose weight.”

Pam says relatives don’t always realise that problems are due to staff shortages.

“We need to explain to relatives and the general public that ratios are essential to providing proper care.

“I’m hoping that a lot of staff get involved in the campaign because everyone has had enough of the pressure we are working under.

“A few people will be worried about losing their jobs but we’ve all got to stick together and understand that if we don’t do anything the situation will only get worse.” 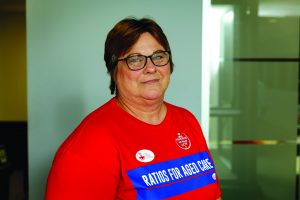 Suzanne has six years’ experience as an AiN and works at a northern NSW facility.

An activities officer who was employed every weekend is now only on duty every second Sunday.

“There are just not enough staff to give dementia residents the proper care they need,” Suzanne says.

“Sometimes there is not enough time for staff to shower immobile residents or get them up for breakfast and we have to feed them in bed.

“Staffing has got worse over the last two years. Morale is really low and we are losing experienced staff to other facilities, which is a real shame.”

Suzanne says residents and staff need the protection of a law that sets out adequate staffing numbers.

She plans to attend the national campaign launch on International Nurses’ Day in May.

“I hope we get lots of aged care staff and community members to the launch because we need to educate the public about the extent of the problem.

“When something goes wrong in hospital it gets a lot of media attention and a public outcry.
Aged care doesn’t get anywhere near the same level of attention.

“Most people don’t see understaffing as a problem until they or a family member go into a facility.

“We need to convince politicians to change the law to bring in ratios. TV ads will play a part in
that because the politicians don’t like bad publicity and nor do the aged care companies.”