Emergency nurse Angie Gittus and four colleagues were arrested for drawing attention to the public health threat posed by the controversial Adani mine.

In the middle of December last year, emergency nurse Angie Gittus together with some 15 other health workers from the Queensland coastal town of Bowen drove for four hours until they were close to the worksite of the rail line being built to carry the coal from the proposed Adani mine.

They camped overnight, woke in the early hours of the following morning and drove another 45 minutes to get the work site before dawn. There, they blockaded the entrance, holding up placards while two of the doctors in the group locked themselves to the gates.

“We had to get up before dawn so we could be there before the workers arrived,” says Angie.

“Our group consisted of nurses, doctors, allied health professionals and some supporters. We went out to the site in our work clothes or scrubs with a message that focussed on the health effects of coal mining.”

“An Adani worker saw us and must have alerted the police. After about two hours the police arrived. They told us we were obstructing the workers’ driveway, and that if we didn’t leave we would be arrested. Some people chose to leave at this point to avoid arrest, as we’d planned beforehand. That left five of us – two public health physicians and three nurses.”

Five members of the group, including Angie, had decided they were prepared to be arrested to draw attention to the public health threat posed by Adani. The police arrested the nurses and held them in the back of the van while they worked out what to do with the doctors.

“We were in the back of the van for about an hour, then they drove the three of us nurses to Clermont police station, another three and a half hours west. They held us in cells, fingerprinted us, took our mugshots and processed charges.”

The two doctors were brought in about two hours later.

Climate change is the greatest public health threat we face

Angie cites Principle 7.2 of the nurses’ Code of Conduct, which outlines nurses’ responsibility to advocate for community and population health.

“The principle directs nurses use their expertise and influence to protect and advance the health and wellbeing of individuals as well as communities,” Angie says.

“I feel I have a duty of care to not only provide care when it’s needed, but to prevent harm. The Adani coal mine will be a major contributor to climate change. Its carbon emission footprint will be equivalent to a small country.”

The proposed mine will also see “billions of litres of water drained from the Great Artesian Basin, which means that the water levels in the aquifers that farmers rely on will be at risk,” Angie adds.

Local rivers and streams risk being polluted and damaged. Angie also cites the 30,000 tourism jobs at risk if the Great Barrier Reef is destroyed as a result of the global warming Adani will contribute to.

Angie has firsthand experience of the devastating effects of extreme weather events that have been linked to global warming. In the aftermath of Typhoon Haiyan in 2013, she flew to the Philippines as a volunteer with an Emergency Medical Response Team.

Working in a small clinic, she provided primary health care to communities whose health services were destroyed.  “But what was more distressing was the psychological harm to people of losing everything they owned, including members of their family.”

More recently she has worked as a volunteer teaching emergency nursing in Kiribati, a Pacific nation of coral atolls threatened with disappearance within a generation due the effects of climate change on sea levels, tides and weather events.

“I saw their fresh water source contaminated with salt water after king tides, and I witnessed the fear, frustration and grief of a culture staring down the barrel of human-driven climate change. I cannot be part of the complacency that allows Australia to disregard our neighbours’ wellbeing and future.”

“I saw the devastating effect of an unprecedented weather event on my own community, including some of my work colleagues who lost their homes to the flood waters. We cannot keep picking up the pieces of damaged communities without taking action to prevent them from occurring in the first place.

“I think it’s important for people in health, who have such a privileged place in the community where we are really trusted and respected, to very loudly advocate for preventing the harms of coal and gas.

“I think that is something we can do in our private life and in our professional life. We can do it by being activists and by writing to our local members. It is protecting our neighbours and protecting the future for the health of our children and grandchildren.” 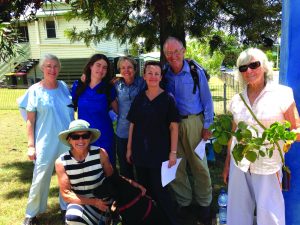