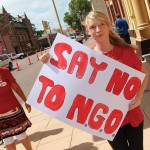 Nurses from Maitland Hospital and the Stockton disability centre fronted the state government’s regional cabinet meeting in Maitland to voice their concerns about privatisation of local public health and disability services.

NSWNMA Maitland branch president Chris Hele says nurses in the Hunter region want the government to “come clean” about their plans for privatisation.

“We’re here at Maitland Town Hall to represent Maitland Hospital and to support our fellow nurses from Stockton Centre,” she said. “The government is looking to close down the Stockton facility and make it into a non-government operation. 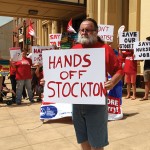 system that gives quality to all and provides appropriate services that the community needs.”

Chris says the government is not being transparent about its plans.

“They are not being honest about what is happening. They have not shared with the community their plans and haven’t given the community the opportunity to have input, which is what today is all about – turning up at the forum and asking the right questions.”

Chris says nurses and midwives are also concerned about the lack of transparency over the planned new Maitland hospital at Metford. 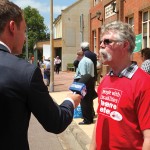 “We’ve also turned up today to ask the Minister about the new hospital at Metford. We’ve previously sent a letter and we’ve had no communication back. Is the hospital at Metford going to be a public or a privately run and owned operation? If it becomes a privately run operation we have concerns about services being reduced, access to the broader community not being appropriate, and having equal access for every patient n the community with appropriate quality healthcare.”

At the forum NSW Health Minister Jillian Skinner parroted the “neither confirm nor deny” response of her health department.

“No decision has been made regarding procurement and all procurement models will be considered during further phases of planning,” she said. “The next phase of planning for the new Maitland Hospital is underway and this will determine the clinical services required to support this community well into the future.”

According to the poll, sale of Australia Post is opposed by 69% of voters and sale of the ABC and SBS by 64%. Sale of Snowy Hydro (jointly owned by the federal, New South Wales and Victorian governments) is opposed by 53%. The sale of Medibank Private, which the government committed to before the election, is supported by 29% and opposed by 54%.