Safety measures will be ineffective if the role of nurses is ignored, researcher warns. 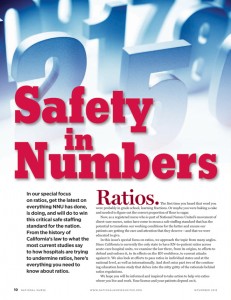 Fifteen years ago the United States Institute of Medicine revealed that medical error was among the five leading causes of death in that country.

Since then the US has made no progress in making surgery safer “despite throwing lots of money” at the problem, Dr Linda Aiken told the Keeping Patients Safe symposium.

Dr Aiken said authorities had neglected the role of nurses, who have the most contact with patients and are best able to “conduct surveillance and to recognise problems.

“This has been problematic for improving patient safety because nursing is a soft target for budget reductions,” she said.

Dr Aiken said most countries she had studied had increased the numbers of bedside nurses during the past two decades. However staffing had not improved enough to keep up with the growing complexity of care as length of stay is shortened and more medical interventions are introduced.

“We can’t because all the patients left in the beds are sicker.”

Her research also revealed a direct link between nursing workloads and readmission rates for the elderly and children. Inadequate nurse staffing resulted in a “very high human toll of unnecessary admissions. Every time a frail elderly person goes to a hospital it increases their odds of never being able to go home again.

“Each one-patient increase in [a nurse’s workload] in paediatric inpatient services is associated with an 11 per cent increase in readmissions among children.”

Dr Aiken said large-scale research was essential to demonstrate the case for improved nurse-to-patient ratios to policy makers. “It leads to very actionable changes in practice and policy.”

Her research helped Californian nurses in their successful campaign to have the state adopt mandatory ratios in 2004. Californian mortality rates for hospital patients following surgery are now among the lowest in the US.

“Importantly we found that public ‘safety net’ hospitals, which take poor people and are always lagging on nurse staffing, for the first time ever came up to the standard of the rest of the state and vastly improved their outcomes,” Dr Aiken said.

Before the introduction of ratios Californian hospitals could not attract and keep nurses because burnout rates were high. Today California no longer has a nurse shortage.

“On average, nurses in California have two fewer patients in their workload than nurses in my state of Pennsylvania, which does not have this legislation.

“We estimated that if Pennsylvania staffed at the same levels that Californian hospitals are required to staff at, we would prevent 2000 deaths a year in our state.

“Our study has led to federal pending legislation that will require all US hospitals to report their staffing levels on a public website.

“In the UK, their own quality organisation within the National Health Service, on the basis of our research, has recommended patient-to-nurse ratios.”