More than 200 nurses and midwives voiced their anger over widespread and persistent short-staffing of John Hunter Hospital during a noisy demonstration outside the Newcastle facility.

The hospital’s NSWNMA branch organised the rally to alert the public to the impact of under-staffing
on the health and safety of patients and staff.

Members carried placards reading, “Put patient safety first – staff all beds”, “Staffed to budget not to safety” and “Is this what you call excellence?”

The NSWNMA branch at John Hunter Hospital wrote to management in June outlining a range of concerns relating to patient and staff safety across the facility.

These included the opening of unfunded and understaffed beds, forced excessive overtime, sick leave not being replaced, an excessive use of under-qualified staff, missed meal breaks and unpaid overtime.

After trying unsuccessfully to resolve issues through the Reasonable Workloads Committee the union took action under the Industrial Relations Act to obtain hospital data that would reveal the extent of understaffing.

The data showed that the Hunter New England Local Health District repeatedly failed to staff wards and units according to the minimum six NHPPD as set out in the Public Health System Award.

“This is a disgraceful situation,” NSWNMA general secretary Brett Holmes told news reporters at the rally.

“Patients have effectively been short-changed on the safe nursing care they should have received to assist their recovery.

“This LHD has knowingly breached the legal commitment they have to their nurses and to the community and frankly management has done everything to hide the numbers.

“We need to hold this LHD and the CEO responsible for what has gone on here and for making sure that it never happens again.

“This problem must be fixed. Additional nurses and midwives must be recruited to meet the demands, the needs of this community.”

Too reliant on overtime

The Union’s John Hunter branch Secretary, Suzanne McNeill, said staff were “blown away” by the news that almost 7000 nursing hours had been stripped from the 13 units on the hospital’s main campus.

“Members were working under duress and fatigued but I don’t think they realised the collective number of hours we had been short-changed.

“They were astounded at that figure and were asking what happened to that funding.  More concerning to me was the amount of additional physical and emotional stress this placed on our staff. I don’t think there can be any compensation for that.

“I would like to see an official apology to the staff and the people of Newcastle who were duped of the hours they were rightfully entitled to.”

Suzanne said the rally outside the hospital showed nurses were passionate about the issue, adding: “I think the
rally worked to get the message out to the public.”

She said management started complying with the Award after the union took action to obtain staffing data.

However, there was now an over-reliance on overtime to ensure minimum staffing.

“Before the union audited the rosters we were battling to get any paid overtime authorised. It was quite often refused – particularly after hours.

“Management preferred to leave beds understaffed and some units were under enormous pressure.

“Staff in some units are now having to work excessive amounts of overtime, which is unacceptable.” 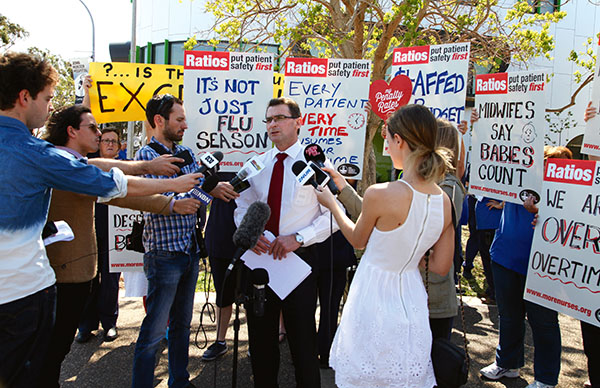