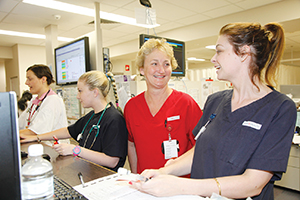 There have been numerous studies that show the benefit of higher nurse staffing and a higher proportion of RNs in the skill mix.

Pneumonia – A US meta-study by Kane (2007) reviewed data from 94 studies conducted between 1990-2006 and found that every additional patient per RN per shift was associated with a 7% increase in relative risk of hospital-acquired pneumonia.

Failure to rescue – An analysis of data by Aitken and colleagues (2013) from 10,184 nurses and 232,342 patients in 168 hospitals in the US found that each additional patient per nurse was associated with a 7% increase in failure to rescue in surgical patients.