The Australian Nursing and Midwifery Federation (ANMF), and its state branches including the NSWNMA, are sending a message to all federal politicians with a new public awareness campaign calling for staff ratios in aged care to be legislated as a matter of urgency.

The media campaign began with a series of TV commercials which aired in the ACT during March to coincide with federal senators returning to Canberra. Mobile billboards also circled Parliament House and were seen throughout the city.

“It’s a national disgrace. It’s a crisis that shames us. Our aged care system has been ignored by governments for too long,” she said.

The ANMF is also supporting the actions of Senator Derryn Hinch, who has introduced a private members’ bill the Aged Care Amendment (Ratio of Skilled Staff to Care Recipients Bill) 2017, and is calling on all parties to support ratios for aged care.

The voices of the campaign are people who are all involved in the aged care system. They include a registered nurse, an assistant in nursing, a doctor working in the system, family members of a resident and even a resident who have come together to call on our politicians to fix aged care. 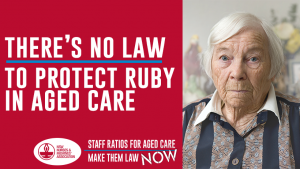