St Vincent’s Hospital is resorting to voluntary redundancies to try to overcome a budget shortfall.

St Vincent’s Hospital in Darlinghurst has initiated a surprise voluntary redundancy program and closed
a bed on every ward.

This follows the widespread temporary closure of beds and services in December and January, in order to cut costs.

Assistant General Secretary of the NSWNMA, Judith Kiejda, said the union wanted to ensure that any offers of redundancy did not put additional strain on nurses who remain.

“However, any plan to resolve these problems must not impede the clinical needs of the health service being provided to the local community.

“Losing our most experienced nurses is not an option when searching for solutions to budget shortfalls.

“Experienced nurses are needed to keep our public health system together and retention of this experience is essential as new graduates build their experience in a clinical setting.”

Expressions of interest in the redundancy program closed last month.

The hospital’s NSWNMA branch called on management to convene a forum to explain the redundancy program.

The branch resolution outlined questions it wanted the forum to answer.

Among other questions, the branch wanted to know how much money would be saved through voluntary redundancy, which nursing positions had been identified for voluntary redundancy and what nursing model of care was being proposed for each affected department.

It asked how voluntary redundancy could be justified in light of the large number of positions already vacant and whether contract workers would be hired to fill vacant nursing positions.

“You could feel the tension in the room,” she said.  “This has caused a lot of anxiety and morale is even lower than during the December/January period of bed closures.”

She said management did not satisfactorily explain why it was planning redundancies when the hospital said it was seeking to recruit staff for 77 full-time-equivalent vacancies.

“On my ward, for example, three nurses have gone on maternity leave and only one vacant position has been recruited for.

“They have closed a bed on every ward and, on some wards, the equivalent of one staff member per shift has been reduced according to the nursing hours per patient day calculated by senior management.

“Affected nurses are being redeployed.”

At the forum, nurses quizzed management about winter staffing plans.

“The answers did not seem to reflect the fact that last winter’s extremely busy period was badly handled,” Kristel said.

She said downtime was scheduled for Easter with only two theatres open for emergency and long-waitlist patients. 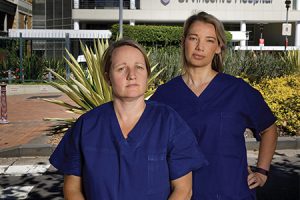