Critical issues for our public health system like improved ratios, increasing the number of clinical nurse educators and solving the problems around specialling and rosters don’t seem to be a priority for the NSW government.

The NSW government has replied to the NSWNMA public health system log of claims which was the culmination of months of consultation with members.

The government has offered a 2.5 per cent pay increase and is completely silent on all other claims. The proposed pay offer is for 12 months.

All other elements of our comprehensive claim – overwhelmingly endorsed by nurses and midwives working in the NSW public health system – were refused.

“We have a law for public sector workers’ wages and conditions that limits any increase to 2.5 per cent. Anything additional to this must come through productivity increases or trade-offs.

“Effectively they are telling nurses and midwives that any improvements to the health system that improve safety and quality of care must come out of your pockets.

“The government needs to wake up and progress the many issues that are holding back our public health system.

“At the top of those issues is the need to extend ratios into areas that are crying out for them and improving them in areas where they are falling short.

“The government can afford it and international evidence shows ratios work.”

Ignoring voices from the frontline

Brett says nurses and midwives are at the frontline of the public health system and understand what these issues are and their consequences.

“The government also needs to tackle other issues that our members have identified such as specialling and rosters. Our survey on specialling found many wards are not getting additional staff and when staff are provided they are mainly AiNs who cannot necessarily provide the whole clinically-assessed care needed. These problems are about to compound with the increased demand that comes with winter.” 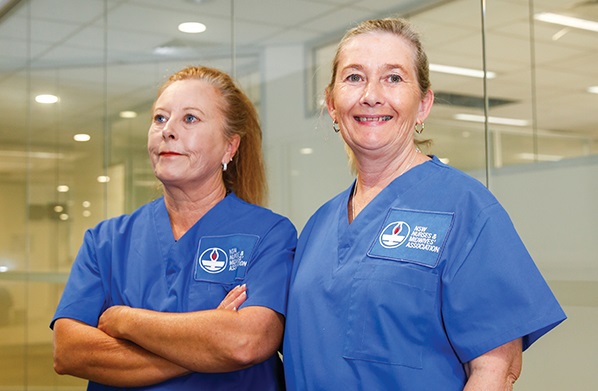 Brett says the government can afford to fix our public health system.

“The Premier and Treasurer say NSW is in a good financial position with economic growth the strongest in Australia and with budget surpluses forecast for the next four years.

“The government needs to use some of these resources to improve safe patient care. Every patient in NSW deserves to receive the best care at the right time no matter their postcode.

“The government’s proposal takes us closer to the next election – a time when politicians are afraid for their jobs. This gives us a strong opportunity to build a campaign to change this policy.

“We need to put maximum pressure on this government between now and the next state election in March 2019. Our 2011 ratios win was a result of a successful campaign with a Labor government. This government has done nothing to improve it. Similarly Victorian and Queensland nurses won their ratios during an election campaign. History tells us that with commitment and perseverance we can turn these moments into an opportunity to improve the public health system.”

Things you can do

Sign up to get regular information about our ratios campaign