The ACTU is campaigning to re-write the rules governing wage fixing and employment in Australia.

It is now widely accepted that Australia’s industrial laws are broken and have given too much power to employers, ACTU Secretary Sally McManus said last month.

Wage rises will only come when workers have enough power to negotiate for better pay, she said.

The ACTU wants to reform the enterprise bargaining system which prohibits unions from taking industrial action to establish uniform conditions across a whole industry.

Instead, unions are required to bargain workplace by workplace for pay deals.

Sally said the system of industry-wide awards used to be fair and transparent and set a level playing field for employers.

“Awards allowed improvements in terms and conditions of employment to flow through the economy in a measured and sustainable way,” she said.

She cited examples such as the 38-hour week, skills-based classifications structures, redundancy entitlements and, most importantly, wage movements.

However, rates of pay in industry awards have failed to keep pace with rising costs in housing, electricity, health insurance and other aspects of living standards.

The enterprise bargaining system has become so restrictive and regulated that it is “smothering wage growth”, Sally argued.

She said that in some industries, such as childcare, it was not practical to bargain for separate pay deals.

“The only way for those workers to have the power they need is to band together beyond a small childcare centre.”

She listed other ways in which the rules are stacked against workers.

“Even when workers can bargain, the rules limit their power and protect employer’s interests above all else.

“The ‘nuclear option’ of employers simply terminating agreements has become commonplace and means that all bargaining is conducted under the threat of loss of all previously negotiated wages and conditions.

“As a result, wages are in crisis. We need to give power back to working people to organise and win improvements to their pay and conditions in fair negotiations with their employers.

“We need to end restrictions on what can be included in a collective agreement and allow free negotiations between employers and employees.

“Workers need to be able to negotiate where the power is, whether that’s at the enterprise, industry, supply chain, site, or project level.”

Give casuals a choice – ACTU

A major goal of the “Change the Rules” campaign is to limit the spread of insecure work.

ACTU Secretary Sally McManus says a Fair Work Commission decision last year confirmed that under current laws, workers are not even allowed to negotiate to stop their permanent jobs being casualised.

The ACTU wants casual work to be properly defined to stop companies keeping their staff on “casual” rates despite effectively employing them in a permanent capacity.

The ACTU wants to allow people to be able to convert to permanency if they have been working in a regular capacity for six months.

“Other countries limit the duration of temporary, non-standard employment and the circumstances in which it can be used,” Sally said.

“Yet in Australia casual and labour hire work with inferior rights and protections can continue forever.

“Our current laws do not properly define casual work. As a result, workers can remain casual for years – the average tenure of a casual is around three years – not because all those people want casual work, but because they are given no other option.” 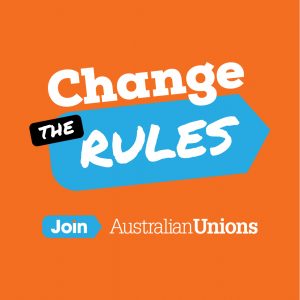