Bupa nurses in Victoria have won a better deal and highlighted staffing problems at nursing homes by going on strike for the first time ever.

Unprecedented strike action by Bupa Aged Care nurses and carers in Victoria has delivered a wage increase of 11.25 per cent over three years under a new enterprise agreement (EA).

The first wage rise is back-paid from 1 August 2017 and the EA includes significant improvements to entitlements and workload management processes.

The EA comes with a signed agreement that the first wage increase in the next EA will be from 1 July 2021.

Bupa’s original offer was 2.1 per cent in a one-year agreement with no other changes.

Staff negotiated with Bupa for more than 14 months after rejecting the original offer.

The union gave Bupa management the required five days’ notice to make arrangements for the care
of residents.

Lisa Fitzpatrick, secretary of the Victorian branch of the Australian Nursing and Midwifery Federation (ANMF) called it the most serious industrial action ever to occur in the private aged care sector in Victoria.

Staff took 37 days of action, including three days of strike action for an entire morning or afternoon shift.

They held stop work and community rallies across the state with a 400-strong rally outside Bupa’s Melbourne corporate headquarters.

ANMF members wore the union’s red ‘Value Recognise Reward’ campaign t-shirts, handed out campaign materials to residents, relatives and the public and spoke to the media.

Lisa Fitzpatrick said Bupa’s initial offer would have kept its nurses’ and carers’ wages in the bottom 10 per cent of aged care facilities.

She said that while the union was pleased with the outcome for wages and entitlements, it would continue to seek better staffing levels of registered nurses, enrolled nurses and personal care workers every shift to improve resident care.

“Aged care nurses and carers striking for the very first time is evidence something is deeply wrong with the aged care system and the way employers choose to roster staff,’ she said.

“Residents have increasingly complex nursing needs, but there are fewer nurses. Safe staffing is not supported by the aged care law, the aged care assessment audits, the Aged Care Complaints Commissioner or workplace laws.

“Members are telling us what they have told their managers. They are seriously concerned for their residents because they are understaffed, working short and going home worried about the care that was missed.”

The Act only requires nursing homes to “maintain an adequate number of appropriately skilled staff to ensure that the care needs of care recipients are met”. ‘Adequate’ is not defined in the legislation and is not enforceable.

ANMF Victorian Assistant Secretary Paul Gilbert said Bupa nurses and carers had shone a spotlight on aged care staffing numbers and had prompted people to ask “what is a safe number of nurses and carers to look after our elderly loved ones?”

“Their action has set a new precedent for engagement in the aged care sector and sent a strong message to private aged care employers still to negotiate agreements,” he said.

Nurses working for Bupa in NSW have told the NSWNMA that the situation in their workplaces is serious.

Nurses say they are working harder and harder to provide the level of care residents and families pay for and expect.

During visits to Bupa facilities across NSW over the past month, nurses have told the NSWNMA that:

Bupa does not pay as much as other aged care employers

Nurses say Bupa can’t attract new staff in many of its facilities in NSW.  This, on top of nurses leaving, has compounded the understaffing.

Members identify plenty of solutions to the situation at Bupa, including:

NSWNMA members are getting involved to make life better at Bupa.  Nurses are pressuring Bupa to do the right thing and to start to take steps for a positive change.  Bupa can’t afford to let things get worse!

What you can do to help: 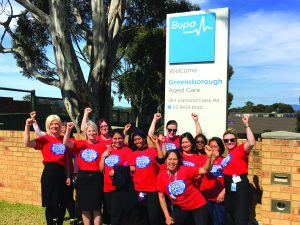