‘As the temperatures rise, so will we’ 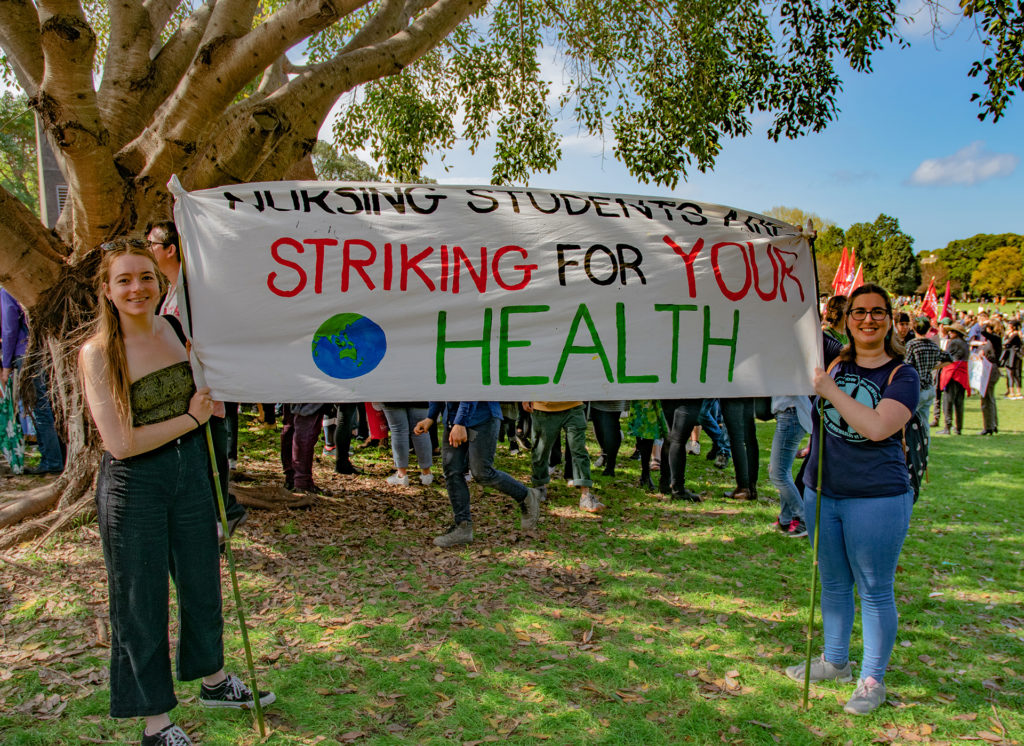 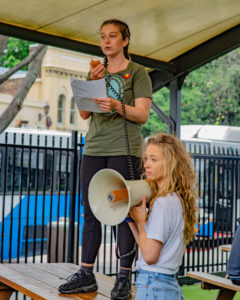 The connection between climate change and health fires up student nurses and midwives.

Two Sydney-based nursing students, Natalie Murray and Sarah Cheer, organised a contingent from the University of Notre Dame to  attend School Strike 4 Climate and  won the backing of the university in the process.

“We have been going class to class and passing motions in support of the strike,” Sarah told The Lamp.

“We started off trying to campaign mainly in the Nursing and Midwifery School. Right from the get go we had support from the school and the dean, and we were told all of the students would be able to go [to the Climate Strike] and not be penalised.”

“That gave us a bit of confidence… and when we showed that there is student support for this movement [the university agreed] that all students will be able to attend the rally without penalty.”

“We really wanted to organise nursing and medicine students because climate change is such a threat to health, and if we don’t take action it will affect us in both our professional and personal lives.”

Natalie became involved in the climate movement after the federal election in May.

“I realised that each person had to step up and actually start to make some real change. I’ve always cared about sustainability but like many other people I was very passive in the way that I was acting on that, so I would not use plastic straws and I bought myself a keep cup.”

Sarah invited her to a climate and health workshop earlier this year. It was an “eye opener”, says Natalie. “I always knew generally about how climate change will affect us, but I never put two and two together about how it will affect health. It really blew my mind that we are already seeing the impacts of this.”

“I think what really astonished me the most… at the workshop was hearing Dr Kim Loo, a general practitioner who spoke about how air pollution is already effecting health.”

Natalie also has a very personal reason to be concerned about climate change. “In high school I went to  the doctors and found out I had a mild form of asthma. As a future health professional I didn’t even know that it was linked to my own illness. There is no family history of asthma in my family, and that asthma has just gotten worse to the extent that I have to carry around a puffer every day, and this is just becoming more common.”

“Many other people, and probably future patients of mine, will probably have far worse effects from climate change than I will. As a student nurse I feel like I can’t sit back and let it happen without doing as much as I can.

Sarah also only recently became active in the climate change movement. “I’ve been quite engaged in politics and social movements since I left high school … but over the last year or so there has been a bit of a groundswell over climate change. When I understood more about the health effects I thought I might be able to get more involved.”

“As future health professionals, you are told to advocate for your patients. I think for me the fact that [climate change] will affect people with chronic illness was quite unsettling,” says Sarah.

Sarah and Natalie have organised more forums at the University where doctors and climate activists have spoken to students about how climate change is impacting health.

Sarah says: “Most students are supportive too. They have heard about the climate strike because of the last two strikes. People generally know about climate change and they know it is an issue we have to get on top of.”

Over 70,000 students and workers turned out in Sydney’s Domain in support of the School Strike 4 Climate.

“It was a great turnout! Everyone we spoke to along the way was filled with excitement and passion. Everyone was overwhelmed with the sheer number of people marching and impressed by the enthusiasm of the student strikers.

The impressions throughout the day were of overwhelming support. When we passed the Sydney Eye Hospital, we had nurses come out onto the balconies cheering us on and waving down to us as we waved our nursing students banner.” Natalie Murray told The Lamp.

Join over 70,000 nurses and midwives in NSW by becoming a valued member today.