Help send a message to Joe Hockey to bury his sick Budget for good, on Thursday 23 October, 12.30pm in Martin Place in the city. Speakers will include Jude Page of the Public Health Association and Nadine Flood of the Community and Public Sector Union. 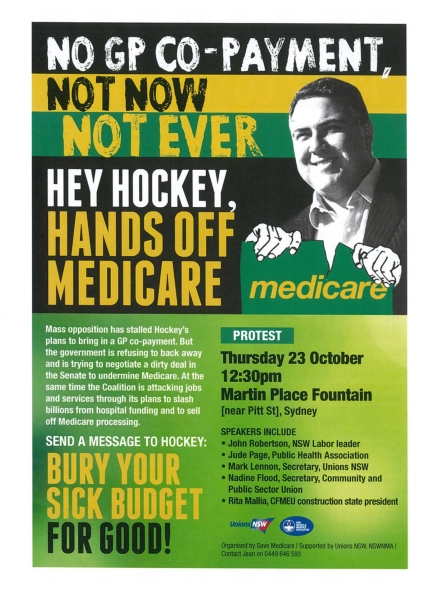 Due to deep public opposition, Hockey’s proposed Budget GP co-payment cannot get through the Senate. But Hockey and Abbott say they will “never give up”. So we need to keep up the pressure over this threat to Medicare.

The Coalition health agenda includes not only user-pays for GPs and medical screening tests, but the introduction of private health insurance into GP services, the sell-off of Medicare’s processing system and the privatisation of large sections of the public health system, including new hospitals.

The government argues that Medicare needs “price signals” to keep costs down. But it is actually out-of­-pocket costs that are spiralling out of control, while growth in public funding is at its lowest levels in 30 years. This was the finding of the Australian Institute of Health and Welfare study released in September. It shows that the government’s argument that Medicare is unsustainable – and the solution of more costs for patients – is driven by ideology, not reality.
The only fair healthcare system is one funded through progressive taxation – not by the sickest and the poorest in the community who are already struggling accessing the care they need.

Abbott and Baird’s health policies are moving to deliver our public health system into the hands of the private sector. At the Federal level the government is seeking ‘expressions of interest’ from companies to take over the IT and processing systems that administer Medicare rebates. This privatisation threatens the jobs of tens of thousands of public sector workers in the Health Department.

Here in NSW the Baird government wants the new Northern Beaches hospital to be run by a for-profit company instead of in the public health system. The fight for the new hospital to be public is being led by nurses and locals who want an accessible public service for their community.

Join in with the Save Medicare campaign. To get involved call Jean on 0449 646 593 or email savemedicaresydney@gmail.com