A bill to keep at least one registered nurse on duty at all times in high care nursing homes has today unanimously passed the NSW upper house.

Liberal MLC Matthew Mason-Cox joined with crossbenchers and spoke in favour of the Shooters, Fishers and Farmers Party bill, which aims to protect a requirement in the Public Health Act 2010 for a registered nurse to be on site at all times in aged care facilities with high care residents.

Update: The Shooters, Fishers and Farmers Party bill to keep RNs in NSW nursing homes will most likely be debated in the lower house on Thursday 11th. While the bill was not opposed by the Government in the Upper House – it is not clear if they will support it. 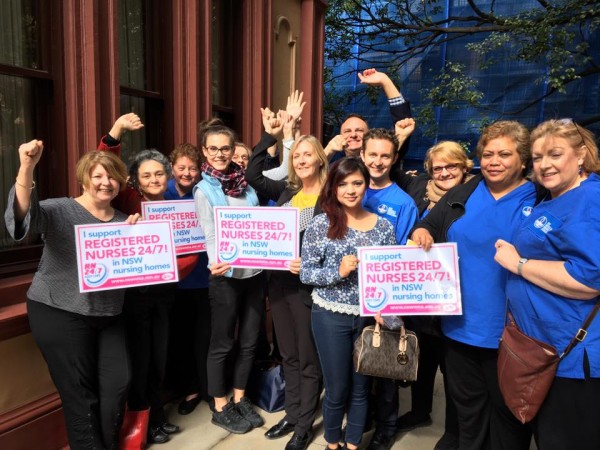 General Secretary of the NSW Nurses and Midwives’ Association (NSWNMA), Brett Holmes, said it was vital the bill is passed when it moves to the NSW lower house for consideration in coming weeks.

“We need to ensure a high standard of care is maintained throughout our nursing homes in NSW, particularly when the aged care sector is in such a dire state nationwide,” Mr Holmes said.

“Last year, the former NSW Health Minister indicated the state government would remove the legal requirement from legislation, despite widespread community opposition and the recommendations of an upper house inquiry to maintain it.

“We’ve been lobbying on this issue since it first arose in 2014 because we know removing registered nurses from high care nursing homes will erode the safety measures that protect staff and residents.

“We’ve all heard the heartbreaking stories from families with loved ones in residential aged care who have suffered as a result of understaffing and skill mix issues – this is unacceptable and it’s time for our politicians to act.

“It’s now up to the NSW Legislative Assembly to do the right thing and uphold the role of registered nurses in residential aged care facilities across the state.

“Qualified and experienced nursing staff are pivotal to ensure safe resident care. We must retain this standard in NSW or we will risk significant downgrades in the quality of care delivered.

“Aged care providers are already tightening their belts as a result of funding cuts in the last federal budget, they don’t need another excuse to cut qualified nurses.”