Brett Holmes: Medicare is not for sale!

Brett Holmes, General Secretary of the NSW Nurses and Midwives’ Association, addressed the Save Medicare rally at Sydney Town Hall on Saturday 15 February 2014. This is his speech:

Let me start by stating very clearly to Mr Abbott how nurses and midwives feel about this issue. Mr Abbott: Medicare is sacred –  it’s not for sale, it must not be undermined!

Nurses and midwives believe that governments, elected by us , have a responsibility to look after the health of all citizens. 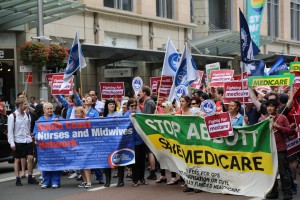 Privatising public health and moving towards an expensive and inefficient US-style managed care system is clearly on this government’s agenda. That is a system where insurance companies decide what care is provided to patients based on level of insurance cover. And most acute care is delivered by profitable corporations. We foreshadowed this last year before the federal election when then-Shadow Minister for Health Peter Dutton tipped his hand by stating in the Australian Financial Review that the Coalition (and I quote) did not see hospitals as immune in its drive to find savings in the health budget and would work with state governments to deliver services through private entities. Obviously, Medicare is also not off-limits in this government’s race into the arms of corporate health care and the idea that if you can’t afford it then you can’t have it, unless charity steps in.

We blew the whistle via a TV ad on this move down the path of an Americanised health system prior to the last Federal election. Of course we were attacked by conservative media. But every new health announcement by conservative governments, state or federal, are confirming our predictions.

Believe me when I wish with all my heart that we had been proven wrong.

Make no mistake, co-pays or any other initiative in the guise of helping to fund Medicare marks its death knell. It’s not just the slippery slope but a freefall into a US managed-care model where insurance companies decide what care is given to patients, that will ultimately be inhumane, inefficient and an expensive way to deal with the really sick, chronically ill patients and the aged and frail. All it will take is one term of this government and more of these measures for our world-class health system to be in crisis. 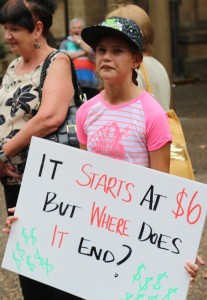 All Australians, whether you’re rich or poor, pensioner or university student, young professional or suburban mum, love and depend on Medicare. Because it works well for all Australians. It lets us sleep easy at nights knowing that we can see a doctor or go to a hospital whenever we need to, even if we are broke. Co-pays or any other form of meddling in Medicare which alters its prime purpose would ultimately lead to a health system where Australians would have to make the ghastly choices others make around the world – the choice to forego or delay medical care for us or a loved one because we don’t have the money to spare that week. So far the suggestions are smaller co-pays, but where does that stop. In the US it is the choice of having to refinance your mortgage or file for bankruptcy in order to pay their medical bills. If confronted with these choices, what would you choose? A universal health care system that works for everyone or one, if Abbot has his way, that will only work for the few who can afford it.

Treasurer Joe Hockey proclaimed last week that the age of entitlement is over. We have news for you Mr Hockey, Medicare is not a privilege or an entitlement, it is an absolute right. Medicare is not free but funded by a 1.5% levy on income tax and general taxation. We know we are entitled to universal health care because we have paid for that right with our blood, sweat and tears.

There is no evidence that a co-payment for GPs or emergency departments will control costs effectively or that it will improve health outcomes.

In fact there is a lot of evidence to suggest that it is most likely to have the opposite effect. That it will lead to worsening of chronic illnesses, more hospital admissions and increased mortality. Delayed health care is expensive and any cost detterent adds to longterm cost to individuals and society.

No doubt the current fee for service system is in need of adjustment, but simply adding a cost to the patient does not fix the problem. As nurses and midwives on the front lines of our public health system, we see firsthand the frail and elderly and the growing ageing population, the chronically ill and dying and the mentally ill who currently can’t receive care in their homes or their local communities and where priority is given to General Practice walk-in patients. The focus for funding should be on primary care. And that means multi-disciplinary care medicine, nursing and allied health.

The focus should be on preventive, high-value care. Nurses and midwives could be major players in this type of funding model. More focus could be given to practice and community nurses so that there would be more community outreach. Professional barriers could be broken down further by registered nurses and midwives taking on more tasks safely and efficiently, rather than the current almost-exclusive doctor focus.

When it comes to funding our health system, why should we be apologists? We can certainly afford it if we choose to make it a priority.

Why isn’t big money at the business end of town paying their fair share to health and other essential public services? After all, business needs a healthy workforce and a healthy society who can afford to buy goods and services. Why is the burden of increasing health care costs falling on the ordinary working citizen and for those who can least afford it?

We acknowledge that health needs more funding. There is an alternate tax that is available if you are prepared to take on the financial transactors who push billions of dollars around the world at a push of a computer button when trading in high volume stocks, bonds and other financial instruments, avoiding the responsibility to pay tax. It’s called a FTT or better known in many parts of the world as the Robin Hood Tax. Countries in Europe are signing on to an FTT, with growing support for it in the United States as well. If Tony Abbott wants to fund health properly, then he should get financial institutions and large investors to pay their fair share.

To conclude, this is the bottom line for us to Tony Abbott: hands off Medicare!

For the past 30 years our universal health insurance system called Medicare has made our country a fairer safer and better society to live in, that is why no sensible political party would put that in jeopardy. But now we have an Abbott government, it appears that is no longer the case. It’s up to all of us here to make it clear to this Abbott government that Medicare is here to stay.

And woe betide the politician or government that tries to take that away from us.