A local nurse went to Queanbeyan at the weekend to lobby Nationals MPs for improved health services for regional NSW, reports the Coffs Coast Advocate.

Sue White said she and 11 other members of the NSW Nurses and Midwives’ Association were buoyed by discussions with politicians attending the NSW Nationals Annual General Conference. 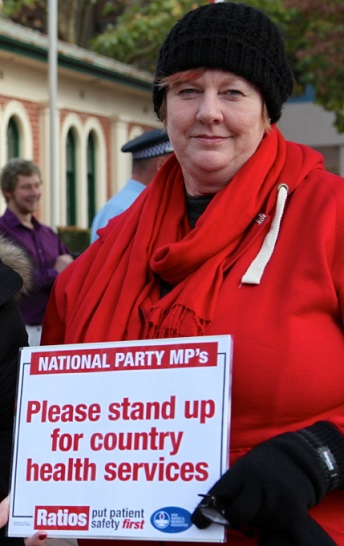 “We were able to explain the level of safe patient care that residents in our electorate are missing out on compared to the care provided in metropolitan hospitals, simply because we don’t have the same nurse-to-patient ratios,” Sue said.

“Country patients deserve the same level of care enjoyed by those in the city, it’s commonsense really.

“We called on Coffs Harbour MP Andrew Fraser to ‘Back Your Nurses’, and I’m hopeful he will take it on board by raising our campaign for ratios in the bush with his Coalition party colleagues.”

According to data supplied by the NSW Ministry of Health, as few as 13.54 full-time equivalent additional nurses were required to achieve one nurse to four patient ratios at Coffs Harbour Base Hospital based on October 2012 data.

The NSWNMA has collected more than 86,000 signatures to date on a petition campaigning for legally enforcable nurse-to-patient ratios to be implemented across all public health facilities.
From the Coffs Coast Advocate, 19 June.
http://www.coffscoastadvocate.com.au/news/nurses-hit-the-highway-to-get-a-better-health-deal/2291753/