Ebolavirus disease (EVD) outbreaks in West Africa – important information for clinicians in secondary or tertiary care as of 10 October 2014.

Clinicians should be alert to the possibility of Ebola in unwell travellers returning from affected areas of West Africa, and obtain a full travel and exposure history. Contact public health urgently and apply appropriate infection control measures while conducting a clinical risk assessment.

– isolate in a single room with private bathroom and an anteroom, with the door closed.

– In hospitals where such facilities are not available, interim arrangements may be required, such as use of commodes in the patient’s room and unoccupied adjacent rooms for anterooms; 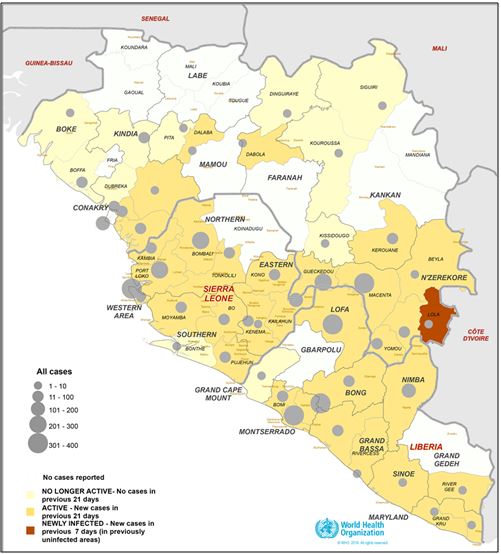 Map: Areas of Guinea, Liberia and Sierra Leone in West Africa affected by outbreaks of EVD as of 1 October 2014 (from the WHO website accessed 7 October 2014).

What are the symptoms and who do I test for EVD?

The likelihood that a febrile illness in a returned traveller is due to EVD is very low, however clinicians should be aware of the possibility of EVD in patients who meet the case definition for a person under investigation, or a suspected case. The risk of infection is extremely low even in persons with a compatible travel history, unless there has been direct exposure to the bodily fluids of an infected person (including unprotected sexual contact with confirmed cases up to three months after they have recovered) or animal (alive or dead).

The onset of symptoms is sudden and includes fever, myalgia, fatigue and headache. The next stage may include symptoms that are gastrointestinal (vomiting, diarrhoea), neurological (headaches, confusion), vascular, cutaneous (maculopapular rash), and respiratory (sore throat, cough) with prostration. Cases may develop a septic shock-like syndrome, and progress to multi-organ failure, sometimes accompanied by profuse internal and external bleeding. The case-fatality rate (CFR) for Zaire strain of EVD cases during previous outbreaks is estimated to be between 50% and 90%, while for other species, the CFR may be lower.

Testing should be considered for persons with epidemiological and clinical evidence as per the Communicable Diseases Network of Australia (CDNA) case definitions:

Note: If a risk assessment determines that a person under investigation should be tested for Ebolavirus, the person should be managed as a suspected case from that point forward regardless of clinical and epidemiological evidence.

Limited epidemiological evidence requires only travel to an EVD affected area (country/region)* in the 21 days prior to onset.

*Areas affected by outbreaks in West Africa should currently be considered to be Guinea, Liberia, and Sierra Leone, but travel to neighbouring countries in West Africa (Mali, Cote d’Ivoire, Guinea-Bissau, Senegal) and countries with limited transmission (Nigeria, Spain) should also be considered where there is strong clinical suspicion. Further, filoviruses are endemic in sub-Saharan Africa.

The treating doctor must notify a person under investigation or suspected case immediately to their state/territory communicable disease branch/centre to discuss testing and management of contacts, see Who do I contact if I have a suspected case? for contact information.

State and territory authorities will notify the Commonwealth Department of Health about suspected, probable and confirmed cases.

How do I test for EVD?

The primary diagnostic method is detection of Ebolavirus by PCR in blood. PCR on a throat swab or urine may also be used and serology is also available. The essential specimen for virus detection is venous blood.

Where tests for Ebolavirus have been ordered, routine haematology and other tests should be minimised since blood is highly infectious. If other tests are required for the immediate management of the patient, these should only be performed in close collaboration with specialist physicians, laboratory staff and public health authorities at the point of care, or in laboratories designated to do this work, guided by jurisdictional viral haemorrhagic fever or laboratory plans wherever possible.

Further information is available in a separate advice to laboratories, available from the Department of Health website.

Are health workers at risk from EVD?

In affected African countries, caring for ill relatives is a known risk factor for infection, and healthcare workers, particularly those in resource poor settings with inadequate infection control are also at risk.

Infection control recommendations in this document for suspected, probable and confirmed cases aim to provide the highest level of protection for health care workers, given the current state of knowledge.

Staff training in the use of personal protective equipment is essential to ensuring that infection control is effective. NHMRC guidance on donning and doffing of PPE is available from the NHMRC website.

What are the recommended isolation and PPE recommendations for patients in hospital?

These recommendations on isolation and PPE for probable and confirmed cases take a deliberately cautious approach by recommending measures that aim to control the transmission of pathogens that can be spread by the contact and droplet routes.

In summary, these should include – at a minimum:

Complete protection from splashes may be achieved by covering all skin using additional PPE, including but not limited to: face shields, overalls, disposable shoe covers and leg coverings. Double gloving might also be considered. This may be required where it is anticipated that the patient may begin having, or where there is already copious vomiting and/or diarrhoea.

Aerosol generating procedures (AGP) should be avoided in an EVD patient. If an AGP is essential, PPE should include – at a minimum – P2/N95 respirator, gloves, disposable fluid resistant gown, and eye protection (e.g. goggles).

Visitors should be restricted to a limited number of immediate family members; and only adults who are well. Visitors who come into contact with suspected case, probable and confirmed cases must be protected according to recommended infection control guidelines. Direct contact with the patient should not be allowed.

Where a suspected case initially tests negative for EVD, but there is no alternative diagnosis and a high index of suspicion remains, consideration should be given to continued isolation and use of the recommended infection control precautions, pending further testing (see “How do I test for EVD?”) and re‑assessment.

Individual organisations may develop facility-specific infection control recommendations that exceed the national minimum standard specified here. Training in the use of PPE is particularly important for using any additional measures, because without sufficient training, additional PPE can be unsafe.

Information about environmental cleaning is available in the CDNA Series of National Guidelines (SoNG) for public health units on Ebola, the Ebola SoNG (section 10 and appendix 12).

Advice for contacts of cases

Who do I contact if I have a person under investigation or suspected case?

Ebolaviruses are part of the family Filoviridae, which also includes Marburg virus. Fruit bats of the Pteropodidae family are considered to be a likely natural host of the Ebolavirus, with outbreaks amongst other species such as chimpanzees, gorillas, monkeys and forest antelope from time to time. Five species of Ebolavirus have been identified, namely Zaire, Sudan, Reston, Tai Forest and Bundibugyo, but Reston and Tai Forest species are not known to have caused outbreaks amongst humans.

Ebolavirus is introduced into the human population through direct contact (through mucous membranes or broken skin) with the blood, secretions, or other bodily fluids of infected animals (often therefore through hunting or preparation of “bushmeat”). In Africa, infection has been documented through the handling of infected chimpanzees, gorillas, fruit bats, monkeys, forest antelope and porcupines found ill or dead or in the rainforest.

Ebolavirus then spreads through person-to-person transmission via direct contact (through mucous membranes or broken skin) with:

Transmission through sexual contact may be possible for up to three months after clinical recovery. Participating in traditional burial ceremonies in affected areas of Africa is a known high risk activity for transmission.

The risk of transmission in healthcare settings can be significantly reduced through the use of appropriate infection control precautions and environmental cleaning.

Airborne transmission to humans, as occurs for tuberculosis or measles, has never been documented.

There are no specific prophylactic (vaccine) or therapeutic (antiviral drugs) options available to treat human infections, and care is largely supportive.

The following information is about the outbreak in West Africa at the time of writing, and does not necessarily reflect the areas of risk to be considered in a clinical risk assessment.

A separate outbreak was first reported on 26 August 2014 in the Democratic Republic of the Congo, with 70 clinical cases, of which 30 have been laboratory confirmed and 43 have died, but there have been no reports of new cases since 28 September 2014.

Figure: Clinical cases of Ebolavirus disease in Guinea, Liberia and Sierra Leone, by week reported by the World Health Organization. WHO updates 23 March to 3 October 2014.

CDNA Series of National Guidelines (SoNG) for public health units on Ebola, available from available from the Department of Health website (www.health.gov.au/ebola)

Surveillance case definition for confirmed and probable cases, available from the Department of Health website