Councillors from the NSW Nurses and Midwives’ Association (NSWNMA) converged on State Parliament today to deliver a patient safety message loud and clear on the first parliamentary sitting day since the March election and on International Midwives Day.

Flanked by a large banner stating ‘Health Minister: It’s time to deliver safe patient care!’, NSWNMA Councillors reiterated the call for minimum nurse-to-patient ratios to be improved and extended to all public hospitals across the state. 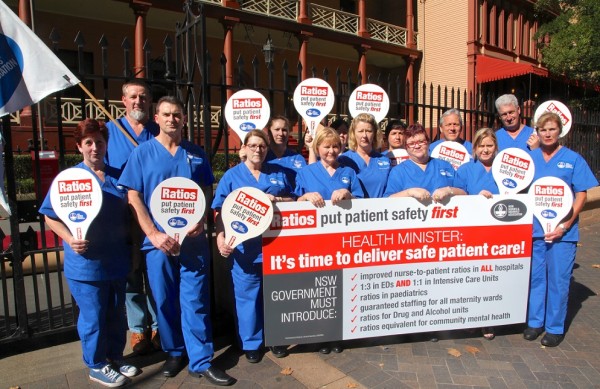 General Secretary of the NSWNMA, Brett Holmes, said thousands of public sector nurses and midwives were once again lobbying the Baird Government to make patient safety a priority, as part of their 2015 claim.

“Every patient in every community throughout NSW deserves the right to safe care. We know that ratios save lives and make economic sense,” Mr Holmes said.

“More than 200 NSWNMA branches across the state voted to endorse this year’s claim and we will continue to lobby the government until they deliver on this important patient safety issue.

“We have a professional responsibility to our patients to apply pressure on the government to improve nurse staffing levels in our rural and regional hospitals to the same levels as the nursing care provided in tertiary referral city hospitals.

Coinciding with International Midwives Day (5 May), the 2015 claim seeks to achieve minimum guaranteed midwifery staffing for all maternity services throughout the state.

Currently many public hospitals, where in excess of 200 babies are born each year, have legal minimum staffing calculated by a specialised method known as Birthrate Plus.

“We are seeking key elements of the Birthrate Plus staffing method to be legally enforceable in all sites with maternity services,” said Judith Kiejda, NSWNMA Assistant General Secretary.

“Depending on the risk category of each mother, this would ensure a certain number of hours of midwifery staffing would be legally guaranteed for the various stages of antenatal, labour, birth and post-natal care.

“We believe these 26 hospitals deserve minimum guaranteed staffing for their maternity wards.

“Our members are telling us that midwives are constantly running between birthing suites and emergency departments due to the demands and are working beyond their 12-hour shifts due to a lack of skill mix.

“Women in rural and regional hospitals without Birthrate Plus don’t receive the same level of midwifery care as their city counterparts because there is no legal requirement to ensure the correct midwife staffing – this is not acceptable,” Ms Kiejda said.

The NSWNMA has lodged the 2015 claim and calls on the Baird Government to empower the Ministry of Health to genuinely negotiate the claims in good faith. Further details of the 2015 claim are available here.