Save Medicare Sydney has teamed up with the NSW Nurses and Midwives’ Association (NSWNMA) and other union groups to call on Prime Minister Tony Abbott to immediately abandon his GP co-payment plan and support the continuation of universal healthcare in Australia.

With a vote on the GP co-payment expected in the Parliament within weeks, a community campaign opposing the proposed budget measure has escalated, prompted by fears the Abbott government is engaged in backroom deals with Senate crossbenchers, including the Palmer United Party.

A large crowd will gather tomorrow at Manly Park, in the Prime Minister’s federal electorate of Warringah, to voice their concerns and demand no GP co-payment or compromise deal is introduced, no privatisation of essential public services and free public healthcare for all.

General Secretary of the NSWNMA, Brett Holmes, said the GP co-payment would spell the end of equitable universal healthcare under Medicare and it was time the Abbott government listened to the people he purported to represent.

“Thousands of people, including the hard-working nurses and midwives of this state, are horrified at the prospect of Medicare being dismantled and our public health system shifting to an Americanised managed-care model where private health insurers dominate, costs skyrocket and people’s overall health outcomes suffer,” Mr Holmes said.

“Our members are also fighting the privatisation of a new public hospital on the Northern Beaches – a facility that will be built, owned and locked into a 20-year contract with a private operator because the NSW government wants to privatise public health and disability services.”

The rally will also hear from CPSU Deputy National President, Lisa Newman, about the impact of the Abbott government’s planned sell-off of Medicare processing systems.

“This outrageous move to sell off Medicare payments could cut many thousands of public service jobs, most of them in regional and suburban Australia where jobs have already been hit hard. This is another part of the Abbott government’s plan to murder Medicare,” said Ms Newman.

Four months after the release of the budget, opposition continues to mount. Betty Marcy, an 84-year-old aged pensioner, will speak at a demonstration for the first time.

“I was so shocked and appalled by the budget’s attack on the disabled, the poor and the sick, that I believed I should speak up, as indeed we all need to at this critical time,” said Ms Marcy, a member of Save Medicare Sydney.

Jean Parker, spokesperson for Save Medicare Sydney, said community angst around the issue was building.

“Public opposition to this attack is enormous. But until the legislation is defeated, there is still the threat of compromises that would be catastrophic for Medicare. Save Medicare Sydney are urging all those who support Medicare to step up pressure.”

Following a rally in Manly Park, the group will march to Mr Abbott’s electorate office on Sydney Road to deliver their message to the Prime Minister.

“We’re taking our message to Tony Abbott’s door – hands off Medicare. We will not rest until the co-payment is resoundingly defeated,” added Ms Parker.

NB: The NSWNMA, Save Medicare Sydney, union groups and members of the community will hold a rally at 1.00pm TOMORROW, Saturday 20 September 2014 at Manly Park (corner of Belgrave St & The Corso, Manly) followed by a march to Tony Abbott’s Manly electorate office. Media are welcome to attend. 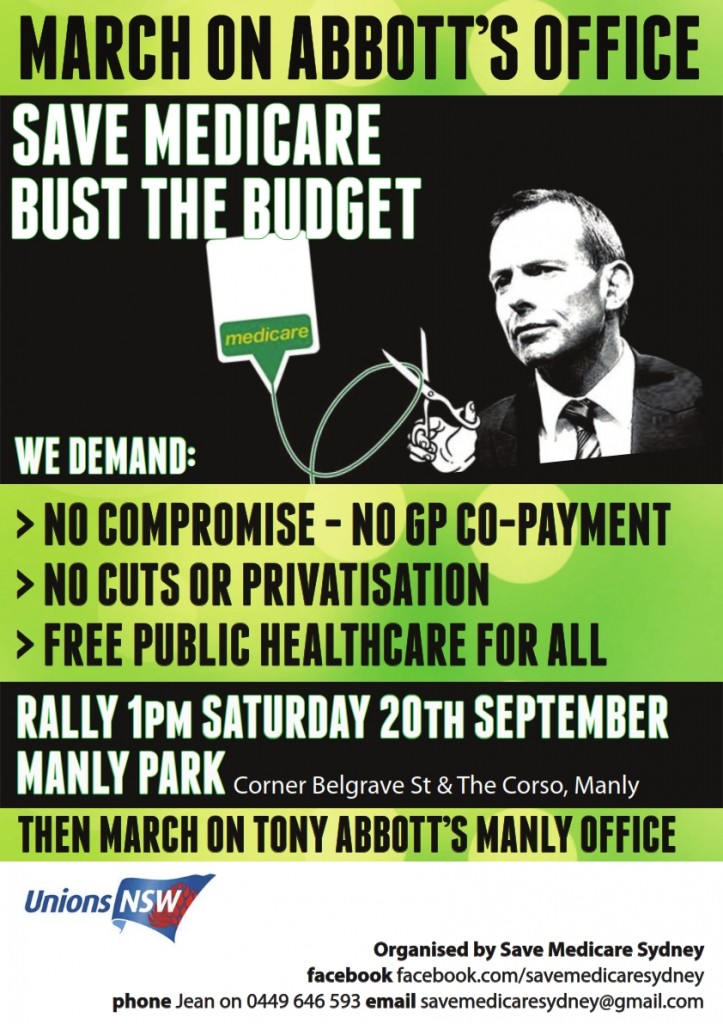