After a month-long campaign, members of the NSW Nurses and Midwives’ Association accepted a decision by Ramsay Health Care to continue their existing allowances in perpetuity – from the North Shore Times, 4 September 2015, by Cassandra Briedis. 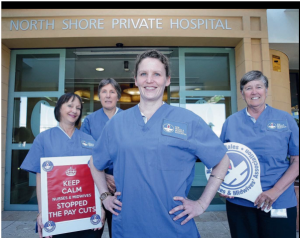 Clinical nurse specialist Emily Fowler said they were all “very happy” with the outcome and thanked the union for helping them to form a united front.

“The cuts would have made a big difference to a lot of the nurses here,” she said.

“They do hard work. It’s in critical areas and I think they should be rewarded for what they do.”

Association assistant general secretary Judith Kiejda said staff were within their rights to defend the longstanding loyalty they had extended to the hospital operator.

“We hope that Ramsay has learnt a valuable lesson about going after the takehome pay of some of the most experienced nurses and midwives – the ones who lead their teams in quality care across a host of specialties,” she said.

“This is a significant win for our members at North Shore Private.

“However, we are disappointed we could not secure the same outcome for any new employees to start at the hospital.”

Last month management at North Shore Private informed nurses and midwives it intended to reduce a number of allowances that had been in effect since the hospital opened 17 years ago.

The cuts were due to come into effect from September 1.

From the North Shore Times, 4 September 2015, by Cassandra Briedis.