Take a stand for Medicare

Join the NSWNMA contingent at the Saturday February 15 Save Medicare rally at 1pm Town Hall, Sydney and take a stand in favour of Medicare. 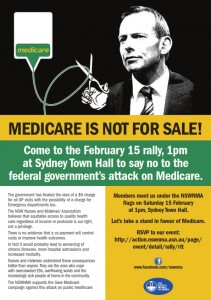 In the lead-up to the recent federal election, the Association was so concerned about a future Coalition government’s plans for healthcare that we made a TV commercial to warn voters that a Tony-Abbott-led government could take us down the path of the American healthcare system.

We were accused of scaremongering – but we are barely past the first 100 days of the Abbott government and the proposals to erode Medicare have begun.

The federal government has floated the idea of a $6 charge for all GP visits, regardless of whether the doctor bulk-bills. Australians pay for Medicare through an equitably shared tax, so an upfront charge would be a sick double tax that would hit those who can least afford it hardest. This charge could be extended to visits to hospital Emergency departments too.

They have also floated the idea of allowing private health insurance to cover GP visits, which would effectively do away with bulk-billing for all but the poorest Australians.

We believe that equitable access to quality health care regardless of income or postcode is our right not a privilege.

We must remember that we have one of the best health systems in the world and we can afford to keep it that way.

Proposals to attack Medicare are irresponsible and misguided. There is no evidence that a co-payment for GPs or emergency departments will control costs effectively or improve health outcomes.

In fact there is a lot of evidence to suggest that it is likely to have the opposite effect. It would lead to worsening of chronic illnesses, more hospital admissions and increased mortality.

Nurses and midwives understand these consequences better than anyone. They are the ones who cope with the overcrowded EDs, overflowing wards and the increasingly sick people at home in the community and they are constantly asked to do more with less because of budget obsession.

The proposed co-payment would apparently save $750 million; this might seem like a lot of money yet the federal government currently gives more than $5 billion dollars a year to health funds to subsidise health insurance premiums  and they’ve just agreed to let insurance companies increase premiums by 6%.

The NSWNMA supports the campaign against this attack on public healthcare.

Join our contingent at the February 15 rally at 1pm Town Hall, Sydney and take a stand in favour of Medicare.

NSW nurses and midwives say Medicare is not for sale!