The Way To Have Your Say 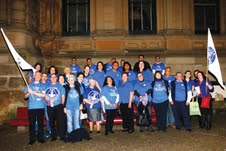 Sydney Alliance launches, with a mission to address issues to make the city a better, fairer, and more sustainable place for all.

More than 2,000 people packed out the Town Hall in Sydney’s CBD for the launch of Sydney Alliance last month. Those attending were representatives of 45 organisations that form the Alliance, with members numbering 500,000.

The theme of the launch was ‘The way to have your say’, and informs the Alliance’s mission to create a city that is ‘more civil, safer, more caring, with more opportunities for its citizens to have a say’.

The Agenda for the Common Good was launched – with a new vision for community care and health, transport and social inclusion.

Members of the community talked about the issues that had brought them to Sydney Alliance, including a woman who lost her eye in a knife attack by youths. She decided to forgive them and now works to help disaffected young people.

Anne Robertson, a senior school administrator, highlighted issues at the heart of the NSWNA’s Because we care campaign as she recounted the moving and sad story of her mother who has spent the past 15 years in a nursing home since being diagnosed with dementia. Anne described how her mother’s care has deteriorated over the years due to the problems of the aged care system.
‘Mum is a silent participant in her life. She can’t complain when she is left unattended for hours, when she is fed solid food that she can’t chew, let alone swallow. She can’t ask to be turned because her 35kg frame is aching with being left in the one position for so long. I have found my Mum lying in her own faeces, deprived of most sensory delights, talked about, but not to, and fed like she is on a production line,’ said Anne.

‘The system is broken, but it can be fixed. It must be fixed.’
Statements of support for Sydney Alliance were received from the Governor of NSW and Cardinal George Pell. Governor Marie Bashir wished Sydney Alliance well and said its work ‘can demonstrate a model which will contribute to the greatness of Australia, a model for communities everywhere’.

For more information on Sydney Alliance, including training and leadership development sessions being held in October, contact Rita Martin at rmartin@nswnurses.asn.au or visit www.sydneyalliance.org.au.