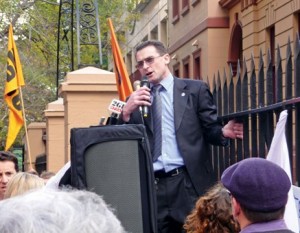 PUBLIC sector unions have warned of a wave of campaigns to oppose the O’Farrell government’s latest changes to industrial relations laws, likely to be introduced to Parliament this week.

The changes, announced a fortnight ago in the wake of a damning report into inefficiencies in the public service, include an eleven-fold increase in the fine for strikes not approved by the Industrial Relations Commission, from $10,000 for each day of a first offence to $110,000, and $220,000 for repeat offences.

The government is also proposing to change the Industrial Relations Act to allow employees to choose which union they join, and to make it easier to sack public servants on the ”unattached list” who do not have permanent jobs.

The changes are opposed by Unions NSW, which has promised to campaign against them.

The general secretary of the NSW Nurses Association, Brett Holmes, said the new fines would penalise actions such as a mass meeting of nurses held on November 24, 2010, as part of a successful campaign to improve nurse-to-patient-ratios.

The NSW Industrial Relations Commission had ordered the association not to go ahead with the meeting but they defied the order, the first time they had done so in a decade.

”If we had not taken that action, then we would not have got the government to talk about nurse-to-patient ratios and, dare I say, we would not have had a commitment to increase the numbers of nurses by 1400,” Mr Holmes said.

The increased penalties would be ”grossly unfair”, he said. ”It would be a travesty of justice given that nurses are almost always, when they’re taking industrial action, trying to seek better outcomes for patient care.”

Announcing the changes on February 23, the Premier Barry O’Farrell said they were necessary to protect taxpayers and commuters from needless and unfair inconvenience.