Gough Whitlam, who has died in Sydney aged 98, can rightly be called the founder of Medicare.

In the early 1970s a large proportion of Australians lacked coverage for health. The scheme for universal coverage was originally called Medibank and was a major plank in Whitlam’s winning 1972 election platform. Medibank was one of the reforms that defined the Whitlam Government and its underlying philosophy. The guiding mission was to provide adequate healthcare to all citizens regardless of their financial means. In his 1972 election campaign speech Whitlam stated: ‘I personally find quite unacceptable a system whereby the man who drives my Commonwealth car in Sydney pays twice as much for the same family cover as I have, not despite the fact that my income is four or five times higher than his, but precisely because of my higher income’. 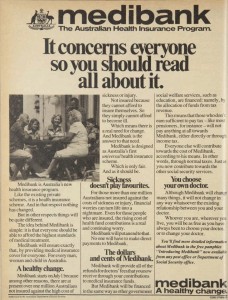 The coalition Liberal and National parties opposed Medibank. It was twice rejected by them in the Senate. Following the 1974 double dissolution election, the legislation was again rejected by the Senate but passed at an historic joint sitting of the parliament in August 1974.

Medibank came into operation on July 1, 1975. In the preceding nine months, the Health Insurance Commission had increased its staff from 22 to 3500, opened 81 offices, installed 31 minicomputers, 633 terminals and 10 medium-sized computers linked by landlines to the central computer and issued registered health insurance cards to 90% of the Australian population.

After a change of government at the December 1975 election, the Fraser Coalition government neutered Medibank, with taxpayers able to opt out of paying an increased levy in favour of private insurance. Such changes eventually led to the original Medibank closing in 1981.

The Hawke government elected in 1983 reintroduced Medibank, rebadging it as Medicare. The major changes introduced by the Fraser government were largely rejected and there was a return to the original Medibank model.

Medicare came into effect on 1 February 1984, following the passage the previous September 1983 of the Health Legislation Amendment Act1983.

Medicare is partly funded by a 1.5% levy on all taxpayers. It allows doctors to provide medical care at no cost to patients through bulk billing. Medicare also provides for basic public hospital cover for all. Health professionals with a Medicare provider number are also included in the scheme.

Throughout the 1980s, Medicare continued to be criticised by the Coalition. For many years, bulk billing seemed to be at risk from a change of government. The 1993 election effectively led to bipartisan support for Medicare and it was unchanged during the 12 years of the Howard government from 1996. The Abbott government, however, seeks to undermine the universality of Medicare with compulsory co-payments for all GP visits, blood and screening tests.

The changes to healthcare coverage through Medibank-Medicare enacted by the Whitlam Government were transformative. Vale Gough Whitlam who has left a remarkable legacy for Australians.