The Welcome Refugees rally will be on Sunday 19 April, at 1pm in Belmore Park, Sydney (near Central).

This rally will not be on Palm Sunday as usual, as that date fell the day after the NSW state election this year, so we decided to hold this rally in April. 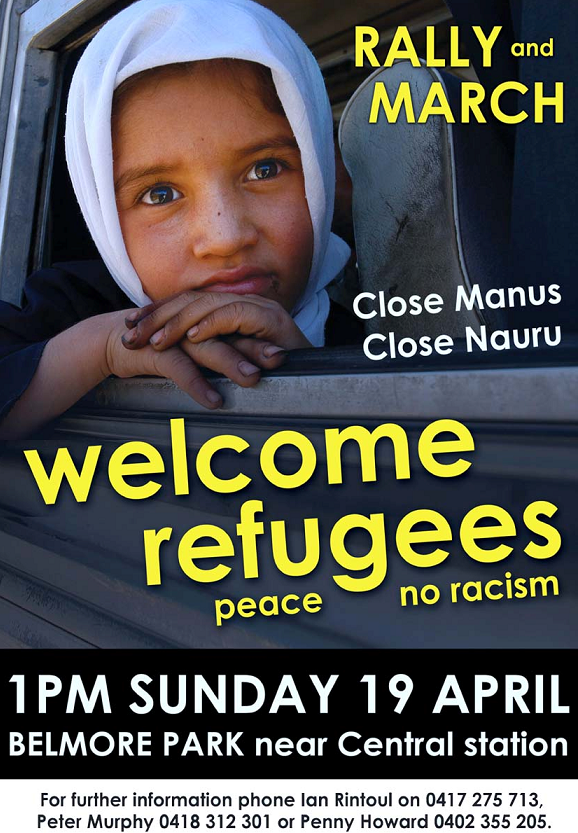 The last year has seen a seemingly endless succession of abuses against refugees. The recent Human Rights Commission report exposed again the damage being done to children in detention in particular. But the government has chosen to shoot the messenger with a concerted campaign against Commission President Gillian Triggs. Although it says it is getting children out of detention, there are 119 in detention and others in the community on Nauru that are going nowhere.

But it is not just children harmed by detention. A year ago on Manus Island, Reza Barati was killed and scores of others savagely beaten by detention centre guards and locals. Manus is still not safe. The fear of further attacks drove protests and a mass hunger strike by asylum seekers in January.

The momentum for change is growing. Last year’s Palm Sunday demonstrations were the largest for refugee rights since the Howard years. Over 200 groups signed a statement against children in detention following the Human Rights Commission report. Christian leaders have staged actions at MP’s offices around the country as part of the “Love makes a way” campaign. We hope that this rally in April can be a broad and powerful statement of opposition to government policies and of support for refugees.