Working families from across Western Sydney will rally in Blacktown on Sunday to demand the Federal Government dump plans to charge a $7 co-payment for doctors’ visits.

Speakers at the rally will include locals whose health conditions or family commitments will make the co-payment impact them more heavily, along with Deputy Opposition Leader Tanya Plibersek and NSWMA Gnereal Secretary Brett Holmes. 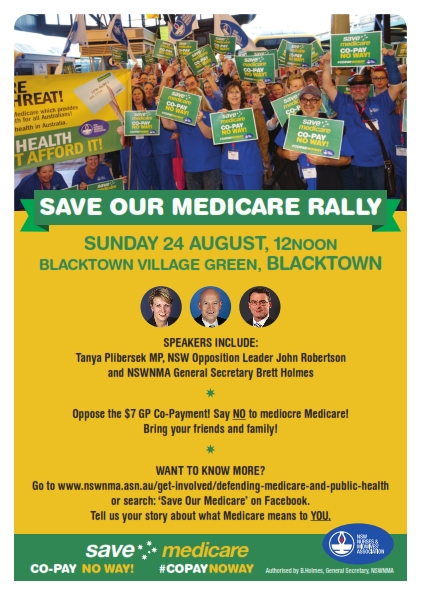 The protest comes ahead of the resumption of the Federal Parliament next week, when legislation to implement the co-payment along with other cuts to the Medicare system will be debated by the Senate.

The union representing local government workers across NSW said Western Sydney had become a focal point for the campaign because of the huge number of working families in the area who will be among the hardest hit by the new fee.

United Services Union General Secretary Graeme Kelly said that while it was true that every Australian gets sick, so everyone will be impacted by the policy, those earning lower incomes, with children, or suffering ongoing medical problems would pay a disproportionate amount.

“Our members work hard to support their families, but they know how tough it is already to  get by without another hit to the family budget,” he said.

“This plan is not just bad for the health outcomes of Australian families, it is another example of a Federal Budget that unfairly targets those who are less well off.

“The result will be people having to make cutbacks elsewhere in the budget just to provide for the health care needs of their kids, which is not a choice any family should have to make.”