What we say about the Northern Beaches Hospital plan

The NSW Nurses and Midwives’ Association (NSWNMA) vehemently opposes the state government’s abrogation of its responsibility to provide public health care on Sydney’s Northern Beaches through its proposal for a privately-operated hospital to effectively replace Manly and Mona Vale Hospitals. It was a great disappointment to read Premier Mike Baird’s recent responses to Manly Daily readers, who had raised genuine concerns about the new hospital development.

The NSWNMA calls on Premier Baird to give the Northern Beaches community all the facts about the privatisation of their public health services. 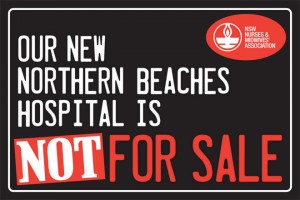 These were the concerns raised by Manly Daily readers, Premier Baird’s responses and what the NSWNMA says to Baird.

[Read Mike Baird’s responses in full in the original article.]

1. Refurbishing or rebuilding hospitals would be a cheaper solution

Mike Baird: Providing a single bigger, better healthcare facility will always be more cost effective than building two smaller facilities, due to the amount of duplicate support services, equipment and infrastructure needed at each smaller site.

We say: The NSWNMA supports the development of a new level 5 hospital on the Northern Beaches, however, we reject Premier Baird’s assertion that the private provision of health services will be more efficient and offer the same quality level of care for all.  Where is the evidence for this? Privately operated ‘public’ hospitals have already failed at Port Macquarie and on Queensland’s Sunshine Coast, while in Western Australia the Fiona Stanley Hospital has been plagued by ongoing issues.

2. The new hospital should be at Mona Vale

Mike Baird: Representatives from Government, local councils, the local area health service and community looked at a range of options before choosing French’s Forest as the preferred location. The Mona Vale Hospital site isn’t suitable for the modern hospital being planned, but it will continue to play a significant role in providing health services to the Northern Beaches.

We say: Although the NSWNMA supports the development of a new level 5 hospital on the Northern Beaches, we completely understand community concerns regarding traffic and environmental impacts associated with the French’s Forest site.

3. Manly and Mona Vale Hospitals will be sold off to developers

Mike Baird: There is a plan to redesign the Mona Vale Hospital, retaining the existing site to provide health services to the Northern Beaches Hospital. We look forward to sharing the plan with the community as soon as it’s finalised. The Government is consulting the community to determine the best future use for the Manly Hospital site once the new hospital opens in 2018.

We say: Despite repeated requests, the NSW government is yet to “share its plan” – much of the detail has been hidden in commercial-in-confidence documentation. Will health services on the site of Mona Vale Hospital also be privately run? Will Manly Hospital be sold off to private developers? The NSWNMA calls on the government to share all of its plans with the workforce and the community.

4. Manly and Mona Vale staff will be forced to work for the hospital operator and they will lose all of their entitlements

Mike Baird: No staff member will be forced to transfer to the hospital operator. Those who want will be able to transfer to an equivalent role at the new hospital on their existing award terms and conditions and their current leave entitlements will be honoured. They will also be in line for a transfer payment based on their length of service.

We say: Nursing staff at Manly and Mona Vale Hospitals have been told their existing wages and conditions would only be guaranteed for two years if they transfer to the new private hospital operator. After this, nurses at the new Northern Beaches hospital will probably suffer a reduction in their wages and conditions. There is a distinct lack of detail and certainty around the protections for transferring nursing staff. Public sector nurses are effectively being transferred to a private employer.

The dangers for patient safety are even more profound, given that the nurse-to-patient ratios found in public hospitals could be removed after two years. That means fewer nurses per patient than currently provided at equivalent hospitals, such as Liverpool Hospital.

5. If I don’t have private health insurance, I can’t use the new hospital

Mike Baird: This is not true. You can use the new hospital if you don’t have private health insurance thanks to a long-term contract negotiated with the private hospital operator. As a public patient you will be able to use the new hospital, including the Emergency Department, in exactly the same way you currently use Manly, Mona Vale or Royal North Shore Hospitals.

We say: Premier Baird said a long-term contract had been negotiated with the private hospital operator, so why won’t he tell the community who the new operator is?

It’s also important to note, the NSW Government’s Expressions of Interest (EOI) document emphatically dictates: “…the State expects the Hospital Operator to demonstrate through its proposed operational, management models and facility design solutions how it will ensure that potentially Compensable Patients are not treated as Public Patients. This is a critical project outcome for the State.” Compensable patient means a privately insured patient.

Will Northern Beaches residents have the same right to be public patients as other residents in NSW, even if they have insurance? Or will they no longer have a choice regarding their treatment and payment for it? In other words, will residents with private health insurance be forced to pay for their ‘public hospital’ treatment?

6. Forty percent of beds at the Northern Beaches Hospital will be exclusively for patients with private health insurance

Mike Baird: There is no minimum number of beds for public patients. The hospital operator will need to provide health services for however many public patients present to the hospital and the contract ensures that condition will be honoured.

Interestingly, the EOI also indicates that the hospital operator could facilitate both public and private emergency department services, which could lead to differential access for patients, based on their health insurance status – the Emergency department could become like an airport, with private lounges for private patients who will obtain quick access to services and a budget lounge for the ‘public’.

7. The intersection surrounding the new hospital will not cope with increased traffic.

We say: Northern Beaches residents already experience daily congestion in the area surrounding the proposed hospital site at French’s Forests. Given the significant impact to the existing road network, it is imperative the NSW government consults with the local community on all proposals as they are approved and also details the length of time motorists will be subjected to construction works.

8. There is no benefit in partnering with the private sector to deliver the new hospital.

Mike Baird: Costs of building the new hospital will be shared with the hospital operator, which will allow the new facility to be delivered faster and at a reduced cost to taxpayers. The contract negotiated with the operator will also ensure it continues to invest in the new hospital over the long term so that the facility remains in step with modern healthcare standards. This approach will also provide greater choice for locals, with high quality healthcare services for both public and private patients available at the one facility.

We say: Public-Private Partnerships have a history of failure in Australia when it comes to the delivery of hospital services. In Queensland, the Newman government reversed a decision to privatise clinical services, such as nursing staff, after a Commission of Audit found service delivery was more efficient under the public sector model. In NSW, Port Macquarie Base Hospital was returned to the public sector after being sold off to a failed private operator, thereby hitting taxpayers’ pockets twice. Fiona Stanley Hospital in Western Australia, currently operated by private provider SERCO, has been beleaguered with problems, from postponed opening dates, a lack of clinical staffing and blown out operational costs.

It is evident the public sector is more efficient and equitable when it comes to the delivery of hospital services. Private hospitals have a role, however they should not replace the provision of public health services in the pursuit of profit.

Join over 72,000 nurses and midwives in NSW by becoming a valued member today.